It’s been a pretty good year for York-based noise-pop duo Fawn Spots. Formed a little over 12 months ago and essentially learning to play their instruments as they went along, Jonathan Meager (guitar/vocals) and Lee Bowden (drums/vocals) have come a long way since then. Ironically enough, their debut gig was supporting The Vaccines, a band who are arguably the antithesis of everything that Fawn Spots stand for. 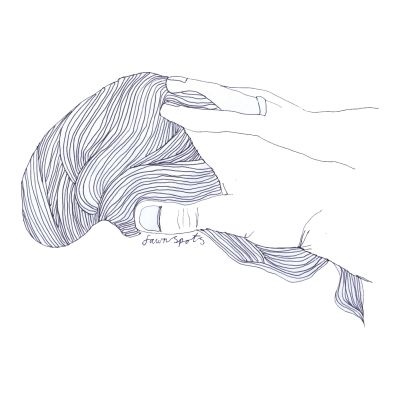 Since then they’ve played with the likes of Sic Alps, Times New Viking, Nodzzz and Honeytone Cody, as well as a pair of London shows for cool-as-fu** promoters Scene Not Herd and Upset The Rhythm. They also found time to release a 6-track demo EP entitled ‘Mess’, a collection of songs that was raw, loud and full of potential – and now, to mark the culmination of a successful first year in existence, Fawn Spots present their first release proper, ‘Hair Play’. The four-track EP wastes no time in getting started, as ‘Grey Arcade’ matches shouty, call-and response vocals with raw blasts of guitar and a rapid-fire punk drumbeat. On the other hand, ‘Cold Expedition’ starts out relatively restrained before kicking into gear about halfway through, cranking up the volume to deliver a satisfying payoff.

‘Slim Pickings’ is the most immediate and punchy of the EP’s songs, emphasising the interplay between Meager’s terse, contemptuous lead vocal and Bowden’s frenetic yelps over an infectious slacker-rock guitar riff. It’s here that the benefit of a properly mixed recording really becomes apparent – there’s still plenty of fuzzy, noisy impact, but the added clarity helps the band’s pop sensibilities shine through.

Rounding off the record is the title track ‘Hair Play’, which begins with a quiet shimmer of guitars that foreshadows the expertly delivered loud-quiet dynamics that run throughout the track. The meaty riffs and relentless drumming of the verses give way to an unexpectedly mellow and tender chorus, showing a different side to the band and once again demonstrating that they’ve got a definite knack for songwriting.

Overall, ‘Hair Play’ amply demonstrates that Fawn Spots are more than just a pair of bored, noisy punks – they’re part of that lineage of bands such as No Age and the aforementioned Times New Viking who marry their fuzzy, lo-fi leanings with catchy, poppy hooks. Not only that, but they’re getting better all the time – we can’t wait to see what they’ve come up with by the time next year rolls around.