Fear Factory has made a triumphant return to destroy our ears with their devastating industrial metal onslaught. Indeed, it’s business as usual for Burton C. Bell and his boys, and after so many years (six, without communication between vocalist Bell and guitarist Dino Cazares by our count), this heavy as all hell collection will be most welcomed by fans of a sub-genre so starved of innovation. 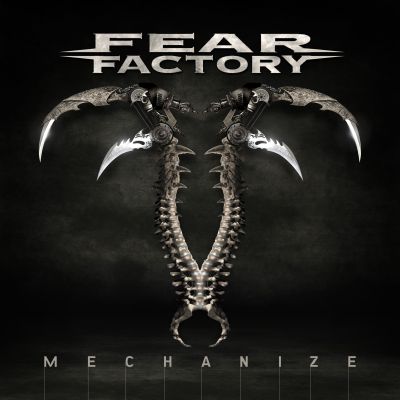 Opener and title-track, ‘Mechanize’ is the strongest introduction we have heard in a long time – it’s an anti-anthem that criticises the state of our desolate society. Following a suitably haunting intro, Cazares’ brutal riffage crashes against Hoglan’s jackhammer drumming and intelligent samples to create a sonic onslaught that will excite you to the point of explosion in just under five minutes …don’t be ashamed, it’s just darn powerful stuff.

‘Industrial Discipline’ features the kind of layers and texture people will remember from 98’s ‘Obsolete’.  On this one, intricate guitar work from Cazares and bassist Byron Stroud matches up against the kind of drum work that Rammstein and Static-X can only dream of, while Bell’s vocals are characteristically ferocious and melodic in equal parts and backed by an absolutely epic keyboard-line.

Indeed, the keyboards take centre-stage on ‘Fear Campaign’, following some ghostly spoken word passages. Rolling drums lead neatly into some progressive guitars and a standout vocal performance from Bell. This is one of the more industrial tracks on the album, and it readily showcases exactly why FF are able to influence bands across the board from the EBM-orientated metallers Psyclon Nine through to the rockier sounds of Sybreed and Cyanotic. Thematically, this track speaks out against our society and the idea that we are all ruled by a fear of what we cannot control.

‘Powershifter’ is next and strikes with a solid drum-led intro and thrash-inspired guitars for a song that examines the industrial revolution and how this level of change can relate to the current day and age. Throughout, it promotes the idea that we must ‘break free from the gears of the machine’. Note the aurally stunning break at around 2:50 – awesome.

As you might expect, ‘Christploitation’ confronts organised religion and the modern perception of God in a suitably decadent way. Keyboard lines cascade over the song’s ferocious death metal groundwork in a way that would make Cradle Of Filth wee themselves – this track is evidence that there’s not a group on this earth that can mix industrial with unrelenting metal quite so well. This is a real standout track that will incite chaos in moshpits at Sonisphere this year.

‘Oxidizer’ hits hard with glitchy electronic elements that wrap around powerful guitar work and easily outshine the likes of Machine Head and Slipknot in terms of impact. Meanwhile, Hoglan’s drumming deserves a special mention – these beats will box your ears red and leave this tune’s imprint in your head until you get to unleash hell around festival season.

The drums pound again for the follow-up, ‘Control Demolition’ – this angst-driven tune takes on the more melodic approach of Bell’s side-project Ascension Of The Watchers and mixes in the best bits of Dino’s Divine Heresy blueprint along with a touch of Ministry and a dash of American Head Charge – a mix of undeniable quality, no?

‘Designing The Enemy’ is without question the most progressive track on the record and a definite standout. This one recalls the strength of ‘Demanufacture’. There are so many layers to this track and it’s sure to be remembered as one of the best things the collective has ever written. Here, squelchy synthetic bits mutate alongside some nifty samples and defiant vocals. This personal track looks at the breakdown of a relationship in a futuristic “cyberpunk” reality – Bell’s repetition of the phrase “All you are, I have made” to close the track marks one of the defining moments on the record.

Next up, ‘Metallic Division’ creates a harsh coldwave soundscape that for a few moments conjures up images of a machine-led future –not bad for 1:30 eh? The final tune on offer is the aptly-titled ‘Final Exit’ – a deep musical number that soundtracks death in the most melodic way you can imagine – despite the subject, this track is built for arena-sized sing-a-longs. This eight-minute beast will be hailed as one of Fear Factory’s finest musical efforts and it is arguably the perfect end to one of the best records you’ll hear all year.

There is something for every metaller on ‘Mechanize’ – no fan of modern heavy music should let this record pass their ears by – just be prepared for a nice aural beating.