Though the name might have you believe you are facing some kind of European neo-electronic outfit, you’ll be relieved to discover that Kyrbgrinder are in fact a three-piece, London based metal group. ‘Cold War Technology‘ is their second album, on the back of which they are now launching a huge UK tour, parading their “funky, riffy, metal grooves” as well as their unique line-up with drummer Johanne James also fronting the band with lead vocals. 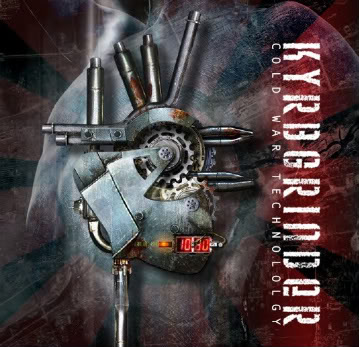 ‘Cynical World‘ kicks things off with a drumming onslaught from the experienced frontman paired with some raucous guitar riffs. The first minute is a changeable and exciting instrumental a bold decision, but one that pays off. When the vocals are introduced it’s a relief to hear audible lyrics and melody as opposed to the all too often relied upon primal roar. For an opener it perhaps lacks a real hook to pull you in, but the musicianship and quality is unmistakable.

‘Don’t Be So Cold‘ ups the tempo and mixes up the sound. Immediately your thinking Disturbed, but by no means is this imitation, it remains unique. The opening few bars are made up of clean guitar and a ride cymbal building up into a rhythmic and catchy chorus. The drum track in the verse across the toms will have all sticksmen smiling, as the wailing guitars and fitting solo will keep axe men on side. Similarly ‘People Of The Free World‘ keeps the pace fast and hectic, with a brilliant switch in time signature keeping you guessing. Sadly the song is let down but its rather predictable and over-done political message.

‘I Wish I Could‘ is a little more obvious in its sound and structure, but it’s high quality heavy rock music, and metal fans will always be willing to buy it and crank it up. The vocals from the evidently gifted frontman still give this band their own sound, and in themselves make the chorus nice and catchy.

When ‘Get Away‘ begins, you’d be forgiven for thinking that the sound might be heading in just one direction, but before the thought has materialised into an opinion, we hit the intricate and brilliant rhythm of the verse, which is made even better by the vocals. This song has everything, complete diversity, a monster behind the kit, guitars being ripped apart and most importantly it has an identity of its own.

‘Through These Eyes‘ and ‘My Heart Bleeds‘, both offer similar characteristics and both submit to a predictable grunge rock sound. Still they make good listening, and the variety of rhythm from the drums is what keeps the sound interesting, while the wailing guitar solos bring an element of fun to the proceedings. Unfortunately, ‘Make Me A Believer‘ does the opposite, as you may feel the band are running out of ideas and falling back on very basic chord progression. The “wah wah” effect in the opening is a little different but aside from that there’s little interest to be found here.

Surprisingly, the band have decided to include a cover of Nirvana‘s ‘Heart Shaped Box’ into the tracklist. Now, we have no issue with bands opting to cover another artist, especially when they are the forefathers of grunge and in turn modern rock music. That being said, there is little point in tackling a cover unless you are putting your own style on the original arrangement, otherwise it’s just imitation, and sadly this is the case here. It is well played, and sounds okay, but they have achieved nothing. We expect better for such an established outfit.

Having dropped our heads in disappointment, sighed and huffed and puffed, we move on to ‘The Resistance‘ and soon enough we’re grimacing with delight. Hefty, brash and angry, but still melodic, they really have an extremely diverse sound on this one that continues to surprise the listener, and this track is the perfect example of what they can really do.

By the final three tracks we’re starting to think maybe they could have left a few of these songs out, there seem to be a few fillers thrown in to pad things out. ‘Face The Change‘ certainly seems to be put in for that purpose, typical sound, predictable song structure, by this stage they need to be trying harder to keep the listeners interest.

Fortunately, the last two tunes have a bit more meat behind them, certainly ‘Don’t Stand In My Way‘, which offers the best drumming of the album with powerful fills in the intro. ‘Where Do We Go From Here?‘ isn’t a bad closing track with a little more haste and intent, it continues to demonstrate just how established Kyrbgrinder’s sound really is.

Overall we enjoy this album, it has strong highlights but in the end its length is not justified, quality has submitted to quantity on this occasion. The band may want to ask themselves the question they pose in closing the album, as they may have exhausted the mileage for their sound.