Legion are a Leeds goth three-piece, featuring singer Robert Maisey with Natya Raskolnikov on guitar, Charles Shelley on keyboards and now ex-bassist Tim Sinister, are out with their first EP titled ‘Hereafter’. A previous offering, the demo ‘Veiled In Mist’ was never issued as a full release, so for all intents and purposes ‘Hereafter’ is the band’s recording debut. 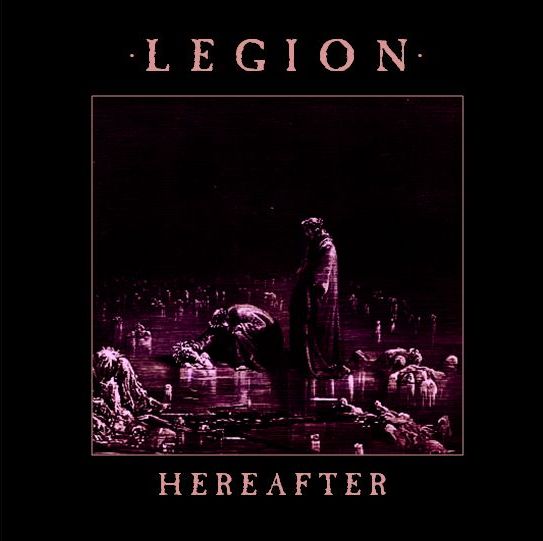 The EP kicks off with the instrumental track ‘Spectre’. Instrumental tracks are always a challenge, especially as an intro. Worst-case scenario, they can feel like wasted filler songs and within the first few seconds they sour the rest of the album experience. Luckily, Legion does not fall in this trap and cleverly use it simply to set the tone for the rest of the EP. It has en eerie, almost David Lynch-ian quality to it, an atmosphere they manage to stay true to until the last note.

After this successful start the EP has a clear qualitative divide, with the first half drawing the shorter straw. ‘Premonition’ and ‘Queen of Hearts’ are in certain places so similar that we found it nessacary to go back a couple of times and check which song we were actually listening to. Now, the band’s use of a drum machine will have to bare some of the responsibility for this. It gives both tracks a cold and industrial feel, and so we wonder if a real drummer’s creative input would have added some much needed personal distinction to each track. It also has to be mentioned that singer Maisey does not possess the strongest pipes, which is not necessarily a bad thing; some of the most successful artist in the world are not amazing singers (Madonna anyone?). However, ‘Hereafter’ offers quite a few vocal hit-or-miss moments, with the chorus of ‘Queen Of Hearts’ marking a definite miss.

Things improve when we get to fourth track ‘Lust’. Here we see the band really embrace their dark roots, with the chilling feel of the opener being picked up again in full. The progression continues with the title track, easily the highlight of the EP. Goth music is a slippery slope lyrics-wise, and there is always the danger of falling into the cliché ditch. ‘Hereafter’ provides fresh and original lyrics and imagery. The chorus especially was stuck our head after having heard it only once. The pulsing bass and drum bridge along with the beautifully timid piano theme adds another dimension to the song. The band could perhaps have been a little more restrictive in their use of keys on this though but the same can be said with the backing vocals for previous tune ‘Lust’. Less is more, and these nice touches would have been more powerful had they been rationed.

All in all, ‘Hereafter’ is a decent offering onto a UK goth scene desperate for new talent and ideas. Though there are things that need to be worked on (a proper drummer guys? Pretty please?), there is definitely a lot of potential here. ‘Hereafter‘ (the song) shows what this band is truly capable of. A producer and a decent studio can do wonders to the already good source material. There are talks of a full-length album around summer; we suggest you look out for this lot.