Inspired by the “lack of good music in the charts”, Welsh rock band Lostprophets will finally release their new album, ‘Weapons’, to the world on April 2. Two years since their last album fans have been on the edge of their seat waiting to see what frontman Ian Watkins and co. have created for them… they will not be disappointed. 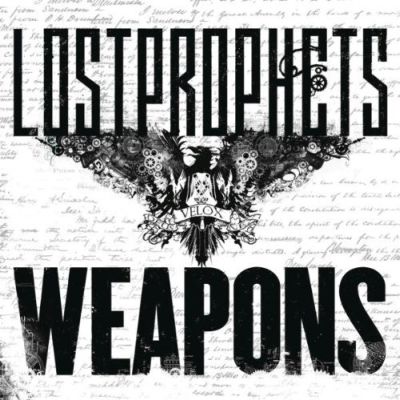 The opening number, ‘Bring ‘Em Down’ is your classic Lostprophets anthem, complete with twanging, greasy guitar riffs and “woah woahs” that set the tone for the rest of the album. They defiantly sing out loud and proud that they are still here in an attempt to get proper rock back in the charts, where it belongs.

Cruising through the album, volume full blast, while driving to work is a must as ‘We Bring An Arsenal’ and ‘Better Off Dead’ thump their way through the car stereo perking you up for the day ahead. Tried and tested! The mood mellows slightly with softer tunes like ‘Another Shot’ (which reminds us of tracks like ‘4am Forever’ from ‘Liberation Transmission’) and a chilled acoustic beauty, ‘Somedays’.

If we are going to be at all critical of this album, one such criticism would be that some songs start to feel similar and are a bit superfluous. When played on repeat the tracks can start to merge into one and you find yourself checking which song you are actually on, but this could be due to Watkins’ vocals which are distinctive to the Lostprophets sound and can lack variation from one track to the next. His voice can get a little “whiney” in songs like ‘A Little Reminder That I’ll Never Forget’ but we forgive him because the album still makes us feel pumped up and happy.

Some hardcore rockers and old-school Prophet fans may say that they are still too mainstream and pop-orientated, but who cares? If the tunes are ‘a-rockin’ and you’re up on your feet singing then the band’s work is done. Not everyone has to be obscure in their approach to this genre of music and what Lostprophets do brilliantly is make rock accessible to a wider audience. ‘Weapons’ does this excellently with its driving guitars, pop elements (perfectly illustrated in songs like ‘Jesus Walks’) which make it a great soundtrack for your summer.