This is a little different, and that’s why we like it…This is the soundtrack from upcoming Bollywood feature My Name Is Khan set for global release February 12 2010, directed by Karan Johar and with a screenplay written by Shibani Bathija. 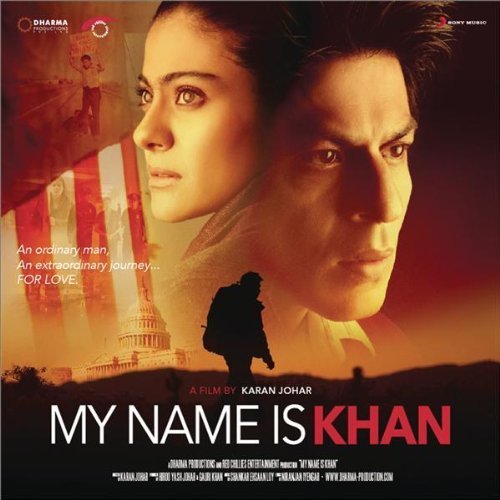 The infamous duo who have appeared onscreen in many features together Bollywood stars Shahrukh Khan and Kajol, take on this film (as quoted by Khan in a Times Of India interview in 2009) “about a relationship between two people, between an individual and the State, and between an individual and the country. In short, there the three important components: love story, Islam and a mild form of autism.”

Travels across America, finding love, obstacles and living with disabilities is what the film focuses on. It also touches on terrorism, in particular the 9/11 attacks and the relationship between the western world and Islam. Despite political aspects, it’s chiefly a film about love and the relationships we have in the world. It just deals with situations that are apparent in society.

The enchanting composition is provided by infamous award-winning musical trio Shankar Mahadevan, Ehsan Noorani and Loy Mendonsa. These three have previously soundtracked acclaimed Bollywood features such as Taare Zameen Par amidst numerous others. Shankar incorporates his Carnatic and Hindustani vocal styling, Ehsan delivers westernised rock and Loy brings in the electronic synths. They’ve worked together for years and have a deep understanding about what music goes with film. They once again prove their expertise with this soundtrack. Lyrics penned by Niranjan Iyengar.

The opening track ‘Sajda‘ has glorious tabla beats, strings and dholak, with the uplifting and memorable voices of Rahat Fateh Ali Khan and Shankar Mahadevan – we’d say it sounds like a spiritual journey crafted from sound. Noor E Khuda is peaceful with delicate strumming and distinctive voices of Adnan Sami, Shankar Mahadevan and Shreya Ghoshal. It invites you into the mystery. ‘Tere Naina‘ is joyous and explores the romantic territory in the film. Here, Shafqat Amanat Ali provides vocals, along with Shankar.

The follow up track is ‘Allah Hi Rahem‘ and it’s sung by Rashid Khan focuses on Islam. It has a strong male chorus, strings and tabla. Meanwhile, ‘De Rang‘ sung by Suraj Jagan and Shankar Mahadevan is a bit pop-rock, but has a very westernised feel to it – as the film deals with these western themes it’s appropriate to have on the soundtrack, the film is also set in the US. This album does suit the theme of the film very well. The ‘Khan Theme’ is performed by the Bombay Film Orchestra and it is as beautiful as it is grand and moody. As it’s an orchestral piece you have all you would expect; Violins and strings which make up a lovely piece of orchestral creation.

The bonus tracks are from Bollywood blockbusters including ‘Kuch Kuch Hota Hain‘, ‘Suraj Hua Maddham‘, ‘Kabhi Khushi Kabhie Gham‘, and ‘Kal Ho Na HoKabhi Alvida Naa Kehna‘.  While we’re not entirely sure why they are on the soundtrack, it’ll appease fans of these famous tracks. Overall, this is a well thought out soundtrack to a well played out film.