Considered to be one of rock’s most successful couples, My Ruin’s Tairrie B and Mick Murphy are back with their seventh studio album ‘A Southern Revelation’. This download only album consists of some of the band’s most impressive and emotional offerings yet. 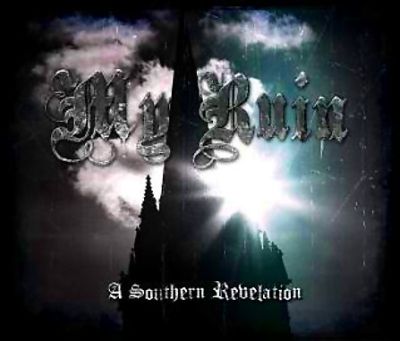 Once again the band combines Tairrie’s powerful vocal screams with Mick’s musical skills to create a truly aggressive and heavy-hitting sound. Recorded in the snowy hills of Tennessee the band appeared to have grown, developing on past influences and taking them up to a whole new level.

The album opens with ‘Tennessee Elegy’ a requiem of explosive passion, rage and contagious guitar riffs. Tairrie’s vocals dominate, carrying messages of challenging friendships and sin – she’s been there, and done that. Then follows ‘Highly Explosive’; a track that would be at home at an AC/DC or Metallica concert. Demonstrating My Ruin’s eclectic moulding of old and new school rock ‘n’ roll, this song is hard to sit through without a few cheeky head bangs. The third tune is one of the most captivating. ‘Walk Of Shame’ discusses the celebrity wannabes gracing the streets of Los Angeles. Echoing the classic My Ruin sound, this song is a possible concert favourite consisting of funky riffs, catchy lyrics and venemous attitude.

This element of attitude and drive is turned up to 11 with ‘Deconsecrated’. Melding Tairrie’s very impressive vocals with Mick’s chugging guitar and bass, this song gets in everybody’s face and makes you pay attention. This is followed by ‘Middle Finger’; a song that, you can probably tell, is rather blunt. Vocals that combine lyrical reading and screaming; the song expresses the anger felt by everyone from time to time. As if picking on the remains of your eardrums after ‘Middle Finger’, ‘Vultures’ allows some time for the listener to rest. Tairrie’s sultry voice develops from whispering to usual weighty vocals, coupled with guitar that lulls you into a sense of calm; as the lyrics say, “The storm is finally passing”, then the song evolves, picking up pace leading you straight into ‘Seventh Sacrament’, This is a song about reflection. Not only does it demonstrate Tairrie and Mick’s emotional ties to the past, but allows the band to show off the skills that have brought them this far.

‘Reckoning’ meanwhile, is a powerful anthem echoing past My Ruin tracks such as ‘Religiosity’. A strong combination of social and political commentary and mind-melting musical action; this track allows for reflection on society and an appreciation of the power of pure rock ‘n’ roll. This is followed by ‘The Soulless Beast’ and it combines everything that My Ruin stands for; symbolic lyrics, prevailing musical ability and the odd scream or two. ‘Mean Street’ starts in a rather surprising way, like Dragonforce after a good old dose of Tennessee whiskey. But after leaving you wondering if you’ve drifted off in to a Guitar Hero-style battle, you’re brought back to reality with Mick’s usual punch of southern swagger. This one is the most infectious track on the album, a closing track that leaves you wanting more.

‘A Southern Revelation’ takes you on a rollercoaster of solid rock and raw metal sounds. Uniting everything that has allowed My Ruin to progress, it truly demonstrates the band’s full potential. The “download only” aspect shows that Tairrie and Mick are not frightened by the modern musical landscape; the album sales and chart positions. Simply put, they merely wish to create influential music that moves the hearts and minds rather than the money.

For more information visit the official My Ruin website.