When listening to a Pendulum record, as with any thrilling live act, it’s important to remember the purpose and potential of the songs. You will not, for example, be toe-tapping to ‘Immersion‘ at the next dinner party you attend, as you sip wine and nibble smoked salmon. Nor will you ever hear a Pendulum tune accompanying an emotional TV montage after the death of a royal. 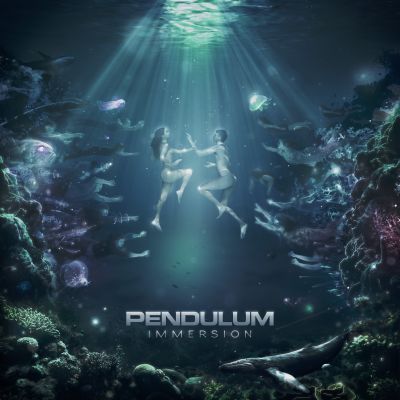 It’s taken them three albums to identify what exactly it is they do: frenetic dance beats, soaring vocals and aggressive rock riffs. They’re making music to be performed live. While their last two efforts were slightly confused about this matter, on ‘Immersion‘, the Aussie sextet are at last able to consolidate their talents and make a record that sounds both experienced and at the same time innovative.

The album doesn’t start particularly well; opener ‘Genesis’ sounds like the soundtrack to a low-budget film about aliens and spaceships. That said, ‘Salt In The Wounds’ ensures the album gets going immediately after. It’s a very accomplished dance track, and, in a positive way, you get the sense they’ve been doing crossover music at this level since they began.

Lead single ‘Watercolour’ follows, with the distinct and spine-tingling riff that Pendulum always employ so well to start off a blockbuster tune. There are lots of ideas packed into this and many of the other songs on the album – Rob Swire is clearly approaching songwriting with confidence and intelligence.

‘Immersion‘ feels generally more mature and eclectic than Pendulum have previously been; an observation that is particularly relevant to the guest appearances on the album. Swire has more than tipped his hat to The Prodigy in the past, so it’s very appropriate and pleasing to see Liam Howlett chirp up on ‘Immunize’. Better than that though, is ‘Self vs Self’; a collaboration with Swedish metalheads In Flames. The Scandinavians supply melodic guitar and rasping vocals, which intertwine beautifully with vintage Pendulum beats, bass and electronics as backing. Regular MC Ben Mount (The Verse) and Steven Wilson of The Porcupine Tree also lend their vocals to enjoyable effect elsewhere on the record.

Two other highlights that deserve a mention are two-part epic ‘The Island’. ‘Part I: Dawn’ is the most moving song on the album and it glides through a well-composed set of chords as Swire sings: “What are you waiting for? / Just surrender tonight”. The song is then re-jigged in ‘Part II: Dusk’; its old bodywork re-sprayed, its engine replaced and the tyres changed. The listener’s head is invaded by bleeps, jolts and hooks as the band get creative. Second single ‘Witchcraft’ is as cool, as melodic, and as frantic as ‘Propane Nightmares’, and will be a hit.

The good ship Pendulum, it would appear, is finally travelling at full steam. ‘Immersion‘ is a set of songs that will sound absolutely magnificent live. Having already established themselves as a live act fit to stand toe-to-toe with the likes of Muse, the world-beating drum and bass group have equipped themselves with an arsenal of impressive, malleable tunes that can only boost their already stunning shows. They know rock music, they know dance music, but most importantly, Pendulum now know themselves.