Albeit unwittingly, most likely, these guys have, somehow, absorbed their near-countryman Mozart’s famous maxim; namely, that rhythm is the most important element of music. Yes, indeed. This is animated, energetic, highly danceable stuff. But, man, it sure is dark in here. However, let’s turn the lights on, briefly, so you, dear readers, can catch some background. 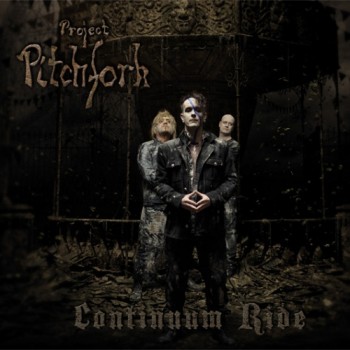 For the uninitiated, Project Pitchfork, who hail, as you might have guessed, by now, from Germany, are an electro-industrial act who’ve been kicking around, in one guise or another, since circa 1990. The founding duo of Peter Spilles and Dirk Scheuber spear-headed their Rammstein-meets-Fat Boy Slim assault on the world with the release of ‘Demonic Puppets‘. Between that and current opus, ‘Contiuum Ride‘, there have been, by our reckoning, a further thirteen releases, excluding the obligatory live albums and ubiquitous E.Ps

So, a prolific collective, certainly, but ‘Continuum‘; is it any good? Well, something of a curate’s egg, we feel, meaning that there is some good stuff here. So, let’s take a look, then…

‘Way Of The World‘ is as acceptable an opener as you could reasonably wish for, introducing the listener to some excellent-sounding percussion which sounds, to our ears, suspiciously like an actual human, somewhere in there, among the drum-machines, loops and samples.

The spine of the song is the march-like shuffle rhythm, seeming beloved by most industrial and post-industrial acts these days (not a criticism, you understand; merely an observation), and its T-Rex-with-a-hard-on vibe contrasts well with the voice – a style pioneered by Sisters Of Mercy main-man, Andrew Eldritch, before attending the Rammstein Finishing School For Post-Modern Industrialists. The single-finger, minor-key, synth-refrain adds that haunting-yet-compelling ingredient which, while a staple of the genre, works no less well because of it.

80s synth-pop pin-ups, A-Ha, might well have cause to do the proverbial double-take, should they ever encounter the disc’s second track, Stacked Visions. Sporting, as it does, a fragmented, triplet-infused, keyboard-riff that sounds like the pi**ed-off, angst-ridden cousin of the one that drives along ‘Train Of Thought‘ from the Swedish band’s 1985 breakout album, ‘Hunting High And Low‘.

In fact, 80s-electronic reference points are sprinkled liberally through the album. ‘43rd Floor’ clearly comes from the Vince Clarke Book Of Generic Synthesiser Licks, while the album’s ninth cut, ‘Supersonic Snakebite‘, will have Depeche Mode crying into their pints of, well, snakebite, gutted they didn’t think of it first.

If all this seems a little harsh, snotty even, we don’t mean it to be. Yes, there is little here that is new, original or ground-breaking but, at the same time, it is very well done and, certainly, the vocals give the work an enjoyably darkened and edgy veneer that saves Project Pitchfork from “generic Hell”.

Production-wise, too, there is little about which to complain. Clear, well-mastered and crisp, you just know this will sound great pounding from a decent rig at your local alternative club-night. And, after all, isn’t that what this sort of thing is all about? Yep, we quite like this and, moreover, unlike eight-out-of-ten-other-leading mags, we, at Soundsphere, have managed to review a German act without once using the word ‘Teutonic’ or mentioning nineteen-bloody-sixty-six. Oh, damn it…