The Screaming Banshee Aircrew have long been one of the most innovative and determined bands on the Yorkshire Goth scene. With their latest album ‘Sugar’, the collective’s black, glittery tongue is still firmly within cheek but there are some delightfully relevant and deliciously dark tracks on offer here also. 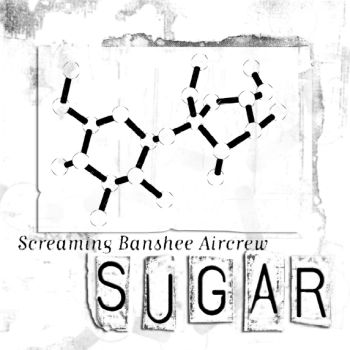 On opener ‘Being Allison’, stomping beats pound against distorted guitars and Mister Ed’s trademark raw vocals to create a danceable anthem for the black-clad masses. ‘Circles’ is an evocative and epic tune that builds on huge beats and a resounding classical influence, it’s certainly the most progressive track this band has ever written. Next up, ‘Cool Ghoul Band’ comes off like a definite rockabilly party track with some funk-infused guitars and upbeat vocals. This is certain to be a major live standout and there will be countless legs and arms flying around…hopefully attached to their bodies. In short, ‘Cool…‘ will provide you with the perfect opportunity to be drunk, stupid and Goth.

In contrast, ‘Promises’ is a touching acoustic ballad that sees the group jump way out of their comfort zone, it’s a raw and unforgiving ode to bad relationships that will resonate with many listeners. ‘Kind Of Crazy’ follows up mixing folk influences with emotive violin strains and soulful vocals for a catchy and addictive standout. Meanwhile, ‘Shutter’ is an angry and distorted, guitar-led track that’ll leak venom all over your inner-ear before the Industrial-tinged ‘Silence’ chucks the established classical ideas in with a deeper vocal attack. The most interesting track on this record is undoubtedly ‘Falling Down’, on here the band again looks toward their folk influences to craft a cheery pop song that will surprise many long-time fans. It’s definitely the most instantly accessible track the Aircrew have composed together. The title track moves in the opposite direction and goes back to basics drawing from the likes of Sisters Of Mercy with a touch of The Birthday Massacre for a dark and vitriolic Goth-rock beast. ‘So Sorry’ is a punk-baiting rock out that will have hundreds of feet kicking and heads nodding at various venues on tour. It’s the most addictive track within this collection and it builds throughout toward a massive ending and it reminds us all that the crew still have much more spite and sarcasm left to unleash. ‘Saharan Stars’ is a spacey and atmospheric instrumental effort that acts as a nice break in pace before ‘What I Want’ crashes through the serenity and slaps you in your overly made-up face with brooding-yet-powerful vocals backed by cascading synths, intelligent guitar lines and solid drum sounds. The album’s final offering is ‘The Birthday Song’ and it sooths with soft piano, and string elements alongside a few uncharacteristically sombre notes from Mister Ed to close.

‘Sugar’ is the SBA’s most varied honest and experimental offering to-date. They have graduated from party-to-prog-Goth in very satisfying fashion. You will not find a more relevant or exciting act on the UK scene currently.

Check out this live video for ‘Hello Mr Hyde’ below: