Skindred’s new record sees them expand upon the ragga-punk formula they have perfected over the last few years and move beyond their comfort zone into slightly more progressive territory for a resounding return. 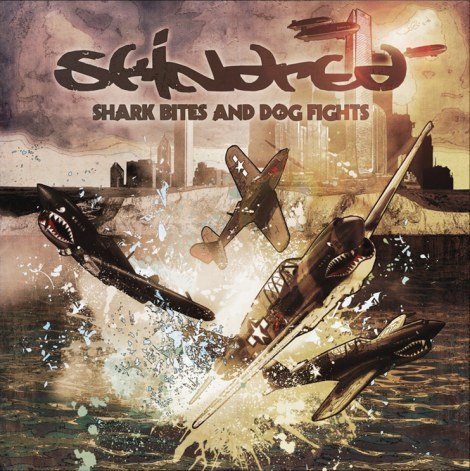 The album’s opener is an electro-infested rocker that’s the perfect dance-floor rival for ‘Nobody’. Benji’s vocals are typically raw while the beats and guitars soar to euphoric heights during the emotive chorus of, ‘If you don’t stand for something you’ll fall for anything.’ It hits hard and fast before the hardcore styles of ‘You Can’t Stop It’. This affecting track mixes slight electronics with chaotic vocals and the typical reggae influence for another accessible floor-filler that may incite riots when played live. It’s a ragga-powerhouse sent to destroy your disco with guitars that build upon solid rock drumming before another uplifting sing-a-long chorus strikes at your heart and takes over your brain, and your feet…

And now it’s on to ‘Electric Avenue’…what can we say? I mean, we are fans of the original from the legendary Eddy Grant and this is just more, well…metal. There are still some distinct pop elements that run through it within the keyboards and treated vocals but clever beats and raging riffage create a rockin’ background that will make this the ultimate metalhead party anthem over the coming months. Meanwhile ‘Calling All Stations’ is pretty much Skindred by numbers but that’s no bad thing – the riffs are classic and the relentless beats will blister your ears.

‘Corrupted’ fires off next and it’s an excitable stomp-fest of pure rock with some pop sensibility and a little but of funk thrown in for good measure. Here the members display individual musicianship and produce a tight track where each instrument stands out and makes an impact on the ear. The best bit has got to be the keyboard-driven chorus that’s completed by some monolithic guitar work and a fiery attitude. Follow-up, ‘Who Are You?’ takes influence from the likes of Incubus. It’s an emotive, almost ballad-like tune that’s a complete change from the breakbeat pace of the previous songs. We think it will be quite welcome as it’ll certainly inspire and definitely resonate with more than just the die-hard fanbase – props for the experimentation lads.

On ‘Days Like These’ the positive mood is continued through schizophrenic vocal tones that meld strong harmony with true ragga-style and some loud as fu** instrumentation. On this, the riffs drive the track forward backed by some truly melodic vocals stylings and punky gang vocals before the infectious chorus is unleashed. Finally and most appropriately to end things it’s ‘Invincible’. Now, at first listen it could be interpreted as an ego-trip because we all know that the Welsh four-piece have had quite the meteoric rise over the last year but if you look deeper there’s an embedded message within this sonic assault that will make you move around like a demented monkey on drugs pumping your fists in the air…(please note, we have not tested this – we do not harm monkeys, honestly we just have a vivid imaginations). The message is that we can take on any challenge…if we have the right tunes blasting out at least. On here, some pounding off-beat drumming takes the lead and clashes with some nifty riffage before Benji’s quirky vocals launch into a raucous and hard-hitting soundtrack for the disenchanted. ‘Ave it.

As stated, while it’s clear that Skindred have experimented sonically a bit on ‘Shark Bites…’ specifically with the use of electronic elements, it’s not a massive departure. Thematically though, it seems that they have progressed and developed into a band capable of creating stadium-sized rock anthems that can soundtrack people’s lives and sit comfortably next to addictive metal rock-outs that’ll always make people sweat, chant and jump – so, we think that’s pretty darn cool.