Unless you’ve been living under a rock for the past twenty-odd years, chances are you’ve heard of Canadian electro-industrialists Skinny Puppy. As one of the founders of modern alt-electronic music their influence can be heard in the music of all sorts of bands to his day. With this kind of pedigree, Skinny Puppy’s latest album Handover should be something pretty special. 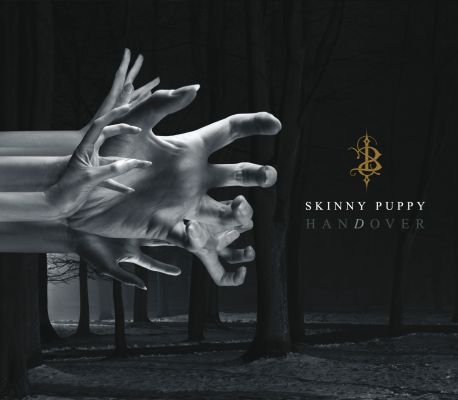 The album opens with some seriously retro electro courtesy of ‘Ovirt’. The first 25 seconds sound like we’ve been taken back to the commodore era with bleeps and bloops-a-plenty. Next we get some fuzzy-sounding vocals, delivered in a robotic monotone. The effect is vaguely hypnotic although not particularly exciting. After a short while the chorus (or at least what we assume to be the chorus) starts up. We only know this because the vocals have changed slightly – everything else remains the same. The song continues in this vein until the end, with the occasional noisy rhythm inserted when there’s nothing else going on. Unfourtunately, rather than adding some interest to the track these noises simply serve to unfocus the track further, leaving the listener wondering what’s going on. “Ok”, we think, “every band is allowed an arty intro track. Let’s listen to the rest of the record”.

There are some parts of this album that are pretty cool. ‘Icktums’ seems more dancefloor-friendly with its 4-to-the-floor beat but it’s still drenched in unnecessary noises and dull, indecipherable vocals that don’t really go anywhere. ‘Point’ is another danceable track and rhythmic noise is used to much better effect but still refuses to develop much past the opening 30 seconds. Of all the tracks on the record, ‘Village’ is by far the most listenable, offering up some nasty, dirty electro and a much more fully-developed feel. The final track, ‘NoiseX’, comes dangerously close to ambient breakbeat but instead veers of into glitchy noise; not a bad thing in itself but we get the feeling that it could have been something much better.

And that’s the problem. The entire record feels like it’s going to break in to something amazing but never delivers. The songs feel like sketches of ideas for much better songs. There’s nothing massively offensive about what is there, it’s just that everything is tainted by the disappointment that it isn’t loads better. We get the impression that what we have here is more about experimentation than anything else which is all good and well but part of experimenting is knowing that the experiment might fail.

If you’re into industrial, electronica or noise, all with the ambient- prefix, then this might be up your street. If you’re not into these genres you’ll probably struggle with ‘Handover’.