This is Sleigh Bells, Chapter Two, for ‘Reign Of Terror’, the band gets glossier and vocalist Alexis Krauss steps further into the spotlight. 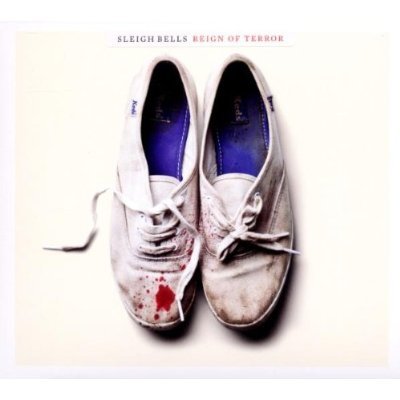 ‘Reign Of Terror’ opens with the sound of thousands of screaming fans and a huge (almost Queen-like) riff. The record continues in this direction for another eleven tracks. It’s business as usual for Derek Miller and Alexis Krauss and business is loud. If you don’t know by now, Sleigh Bells make a godawful, unholy racket. Think along the lines of Cheerleader-led, hip-hop metal. It’s the sound of your iPod corrupting itself and playing all of your songs at once. It’s just… spectacular.

Album two carries on in much the same vein as album one. eleven tracks of cacophonous aural attack. on its own, ‘Reign Of Terror’ gets to be a tiring listen. there’s just a little bit too much heaviness, it’s one riff too far. On first listen, there’s something almost imperceptibly different about this album. It sounds… poppier? Poppier. Alexis’ vocals are higher in the mix, they’re clearer and the cheerleader chant/slogans take a backseat to some serious singing. Alexis Krauss kills it on this record… in a very good way. Her vocals are bolder, more “badass” and just dripping with untouchable hipster hotness. Sleigh Bells have never really been interested in the verse/chorus/verse school of songwriting, but with ‘Reign Of Terror’, they’ve struck a perfect balance between all out sonic war and sing-a-long vocals.

This time round, the songwriting process is far more collaborative than on ‘Treats’, The difference is just obvious. ‘Treats’ was, for the most part, already written before Alexis joined the band. The beats were stronger and more fully realised than the vocals. Reign Of Terror is far more guitar-orientated than the first album. Good news for Poison The Well fans (Derek played guitar on their three greatest records), bad news for nobody. This is a win/win situation. Heavy riffs + big beats + sexy vocals = happy bunnies. It’s just simple mathematics and Sleigh Bells have perfected it. Not bad for their second time around.