Soulfly are back and they are back to doing what they do best. Rocking our socks off! Max Cavalera, Marc Rizzo, Bobby Burn and Joe Nunez have left the studio in ultimate form with their new masterpiece ‘Omen’. 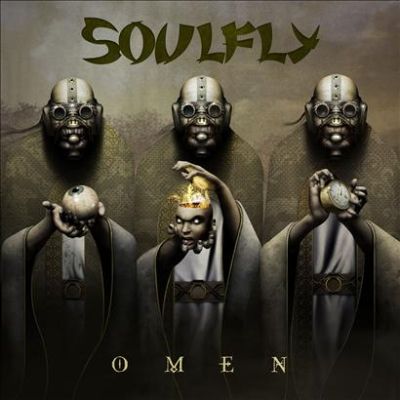 From the very start, you can tell that this is going to be nothing like any of the previous albums. When you first hear it, don’t expect anything as raw or as tribal as previous albums such as ‘Primitive’ or ‘Conquer’, this album is a deep and furious audio onslaught of thrash-punk-metal. It’s different but don’t worry because every single track delivers a punch that only Soulfly can.

The first track that has been released from ‘Omen‘ is a monster of a comeback single entitled ‘Rise Of The Fallen‘. Guest vocals for this one have been provided by Greg Puciato of The Dillinger Escape Plan and the song is probably the most reserved track on the entire album. The only other guest vocalist on record is Tommy Victor from the industrial metal band Prong for the track ‘Lethal Injection’ however Max’s sons have contributed on the drums for the cover tracks ‘Four Sticks’ by Led Zeppelin and ‘You’re Life, My Life’ by Excel. We have also been treated to an original Sepultura cover too. That’s right…Soulfly will be covering ‘Refuse/Resist‘ just for our enjoyment.

We believe that Soulfly have stepped up the game that they have grounded since 1998. They have managed to branch out from the roots that were planted and grow those extra branches, making a newer and far richer sound. ‘Omen‘ has incorporated everything that we love so much about Max and the gang and yet, it sees them broadening their horizons in a way that might surprise long-time listeners. The addition of a lot more classic solos and cross-genre sounds such as thrash-metal and hardcore have rounded the edges and given this album a royal kick up the backside.

Although this album is in our opinion not as raw as their previous work, the listener can tell that Soulfly have kept their heritage and every single track on the album is full of surprises and guaranteed to get any heart racing. It’s worth a mention that Marc Rizzo’s insane shredding and guitar work will leave you stunned. The guitarist has definitely given the band an extra edge on this material.

The only elements of continuity that Max and company have applied when considering their past material is to continue their epic chill-out track series. The newest edition entitled ‘Soulfly VII‘ (the seventh track in the series of seven albums). It is one of the best songs on the entire album – a fantastic finisher to the disk with its ambient Police-style guitar and drum work.

In conclusion, we have mixed feelings about the album as a whole. It is a bit of a shock to the system to hear such brutal metal done in such a focused and intricate manner – the raw punkish qualities that many fell in love with originally are scarce, but that’s to be expected because the band’s musical direction has evolved so much over recent years. Really, this could be the extension of the Cavalera Conspiracy project, but it’s not. It’s fast, hard and brutal fu**ing metal from one of the most iconic alternative bands of the last decade. Celebrate the return of Soulfly with this immense recording.