Cast your mind back a decade or so ago, and you may recall a band from Ireland called The Thrills. Heavily inspired by the 1960s California music scene, their debut album ‘So Much for the City’ was an international success; but stuck in the West Coast groove, their appeal faded by their third album. 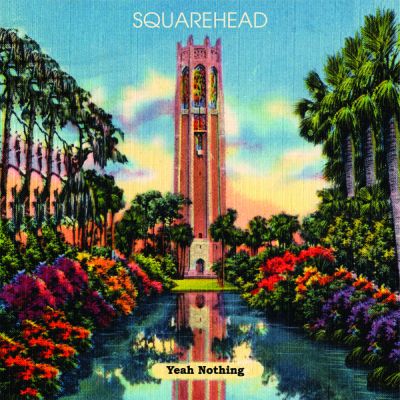 A new bunch of lads from Dublin have arrived, also with dominant influences by the sounds of the West Coast, but there’s more than the air of sea and surf to ‘Yeah Nothing’ by Squarehead. The most blatant case of Californication is album-opener ‘Midnight Enchilada’; an infectious rhythm moulded in a classic surf-pop style mould. ‘Axes of Love’ and ‘Confident Girls’ diminish this style, but retain enough of the ‘Pet Sounds’-era Beach Boys to settle comfortably with the real thing.

However, in songs like ‘Save Yourself’ and the catchy ‘Mother Nurture’, we’re introduced to indie sounds more akin to the East Coast garage scene. Roy Duffy’s guitar, Ian McFarlane’s solid bass and backing vocal work, and Ruan van Vliet’s drums are slick enough to intertwine the dichotomy of West and East. These guys aren’t hanging around in a one horse town, that’s for sure.

There’s even a few nods to Britpop as the album progresses; most notably with the Blur-style rhythms of ‘Tasty Fruit’, the classic jangly guitar lines of ‘The Abandoned Sea’ and the near-audaciously titled ‘I Wanna Hold Your Hand’, brimming with Beatles references aplenty. Standout track on the album is ‘Circle’, one of the more pointedly garage rock sounding track – it finds the trio musically and vocally confident and tight, and punches its way along in under three minutes.

Speaking of track times, each of the twelve songs on ‘Yeah Nothing’ certainly can’t be accused of outstaying their welcome; only ‘Confident Girls’ exceedes the four-minute mark. You get the impression the Squarehead guys have done their homework and created an LP with the greatest respect to the 1960s American pop-rock songbook.

Lead single ‘Fake Blood’ rounds off the album. Here, van Vliet’s pounding drums are an effective foil for guitar and vocals to create the garage-rock anthem of the album, and the counterpoint to ‘Midnight Enchilada’. Perhaps that’s the point Squarehead are trying to make. In summary, ‘Yeah Nothing’ offers a blend of classic-style American pop-rock which is well-crafted and offers room for the Irish trio to develop their sound in numerous directions. Just don’t go back to Big Sur too much on the next album, though.

Squarehead’s ‘Yeah Nothing’ is released on Richter Collective on September 19.