Collaborating with contemporary artists is nothing new for 85-year-old New York crooner Tony Bennett. His patronising of the MTV generation in the early 1990s brought him new admiration and respect from the industry and music lovers, and since then, he’s found plenty of good company to share the spotlight with. 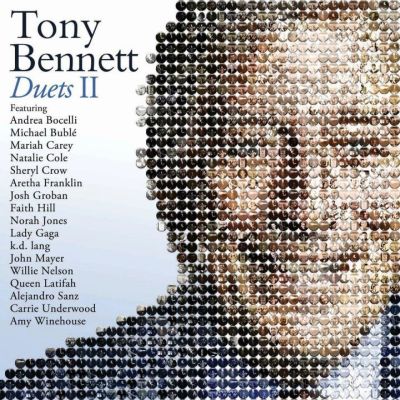 The follow-up to 2006’s ‘Duets’ keeps the premise of the first installment; selected compositions from the Great American Songbook set to an orchestral backing, complemented by a comprehesive catalogue of leading luminaries and modern masters spanning all musical genres. Talking about ‘Duets II’, Bennett says, “It is a thrill to perform [these songs] with artists that I admire to create new interpretations of the music I love so much.” It’s evident that passion for the music is alive and abounding with each track.

The opening tracks see Bennett indulge in humorous interplay with two artists of today who you could say are the offspring of the first MTV generation. Curtain-raiser ‘The Lady Is A Tramp’, sees Bennett team up with Lady Gaga, who teases the listener (and even Bennett at points) with a tantalising vocal routine with an authentic vampish vibe soaked in a sweet New York accent. The fun continues with John Mayer joining in on ‘One For My Baby (And One For The Road)’, as close to the album’s nod of the hat to the Rat Pack as it could get.

His high-profile duet with the late Amy Winehouse, ‘Body And Soul’, follows. On what turned out to be her final recording, Winehouse’s voice generally holds up with the one we became familiar with on ‘Frank’ and ‘Back To Black’. Drawing the song to end as she proclaims “My life a wreck, you’re making”, the pathos already felt reaches a crescendo, as Winehouse matches Bennett on the final long note.

The choice of artists collaborating with Bennett on ‘Duets II’ certainly play to the strengths of their individual styles. kd lang’s delivery on ‘Blue Velvet’ is smooth and soothing; while Aretha Franklin, as always, delivers a soulful, yet understated, performance on ‘How Do You Keep The Music Playing’. The artists you expect to overperform are similarly restrained; Michael Bublé and Josh Groban don’t attempt to outsing Bennett on their respective songs, while Faith Hill and even Mariah Carey also manage to toe the line.

Those you think may find discomfort in these surroundings step up to the table with a surprisingly strident result; Sheryl Crow on ‘The Girl I Love’ and the luscious ‘Who Can I Turn To (When Nobody Needs Me)’ with Queen Latifah stand out. Even Willie Nelson’s acoustic guitar making a cameo on ‘On The Sunny Side Of The Street’ is congruous among the tracklist.

One of the songs Bennett made his own in the early days of his career, ‘Stranger In Paradise’, is pitched here as a duet with Andrea Bocelli; who again, does not overpower Bennett, but offers a subtle foil to the star and the soaring strings. Also adding a continental vibe is Spanish singer Alejandro Sanz, who interchanges lyrics in his native language on ‘Yesterday I Heard The Rain’, offering a unique classical dimension.

The collection of tracks are reverential to a man whose recording career now spans an incredible seven decades and a revelation to fans of today’s pop stars that they can take on the standards with dignity and respect. We sincerely hope Bennett is still on this Earth to produce ‘Duets III’ in another five years’ time.