VNV Nation’s latest record is simply epic. From the resounding and optimistic opening of ‘Pro Victoria’ with its huge percussion and driving orchestral elements alongside the dance-orientated second track ‘Sentinel’. It’s clear from the first few minutes that the definitive futurepop band are back and on form moulding heartfelt and soulful music using “cold” electronic means. 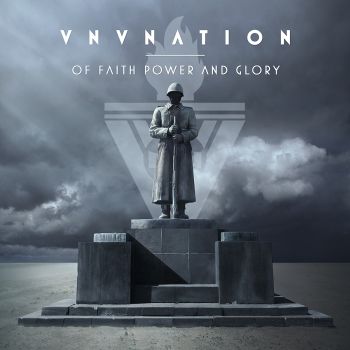 Musically, follow-up track ‘Tomorrow Never Comes’ could be the soundtrack to the perfect dream despite the negative lyrics, this one may go down as one of VNV’s best-loved tracks. Emotive keyboards intertwine perfectly within the skyscraping synth goodness for a beautiful-yet-deadly tune. ‘The Great Divide’ starts off with a fast tempo and some nifty rock-style beats that are soon broken by vast electronic waves and Ronan’s trademark soothing vocals. It’s a bold and affecting track that will most certainly pull the listener in with its emphatic backing beats and evocative rhythm. In contrast, ‘Ghost’ is the standout of the album both lyrically and musically, it readily showcases how diverse the group can be. It’s a totally seductive, dark anthem created with pop sensibilities and heart-wrenching synth-lines.

‘Art Of Conflict’ is the album’s first really Industrial track, it’s heavy bass will burrow into your brain and stay snuggled in there for hours. Here, the influence of VNV on many of the greatest contemporary dark-electro acts in the UK including Uberbyte and Modulate becomes clear. ‘Art Of Conflict’ will be your new favourite dance tune.

‘In Defiance’ takes a similar approach, attacking right from the start with mammoth beats, cascading synths and sexy bleeps. Lyrically this is the best song on the album, and it is definitely one of the best things VNV has ever written. It’s a simple formula, but one that’s incredibly effective. This song is for Sophie Campaign and it’s for everyone who has ever stood up for what they believed in. This is one of the best tracks we have heard all year and you will not be disappointed. Next up, ‘Verum Aeternus’ is an anthem drawing on 80s pop and even some rock influences. This one will have fists pounding and bodies moving when the group break it out live. The tune will create the perfect atmosphere whether you are on the dancefloor or out in a large field somewhere, it may also lead you in to a state of total euphoria…dangerous.

Don’t worry though, ‘From My Hands’ will bring you back down. It’s a touching, piano-based ballad that sees all of VNV’s electronic shell stripped away for something that could turn into one of their defining songs, right up alongside ‘Illusion’. An intense feeling of loss and letting go engulfs this track and sadly, it’s something that most listeners will be able to identify with, but there is hope within the captivating words and well thought out music.

The final offering on this is ‘Where There Is Light’ and this is a definite rock track with some live beats and classic guitars which work well alongside some enchanting synths. Dare we say it, it’s almost like U2 gone electronic. This track offers up a nice change of pace and it serves a purpose as it ends the disk on a fine and uplifting note.

VNV have always been able to blend bright and hopeful electronic sounds with dark and hard-hitting lyrics that take an informed look at the state of humanity. This has earned them a dedicated fanbase and a solid reputation. On this record the group don’t really break new ground except to head into slightly heavier territory on a couple of tracks which may be met with fire from die-hard fans. Unquestionably though, VNV have produced one of their best albums to-date. It’s a collection of accessible and very nearly flawless electro music that blends elements of Industrial, pop, dance and EBM for resounding results. Whatever you’re into, if you give ‘Of Faith, Power And Glory’ a spin, it’s something you can enjoy at any time of day, and whatever kind of mood you are in, each song will inspire a whole range of different emotions.