Wednesday 13 has always been a master of horror-punk and he doesn’t disappoint on his latest EP. Typically comical lyrics and behemoth riffs dominate on opener ‘B-Movie Babylon’ for the disk’s highlight. 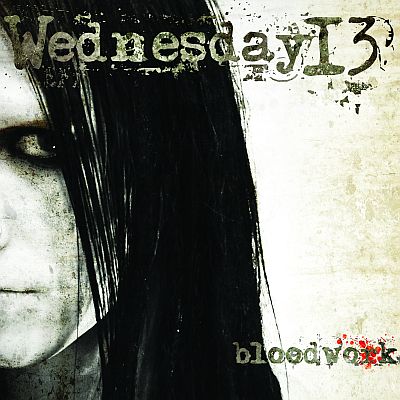 On the new track ‘B-Movie…’, there are hints of the more serious tones that dominated on the most recent album ‘Skeletons’ still linger, specifically within the heavier guitars, but for the most part this offering is just good fun and the artist certainly hasn’t lost his flair. Follow-up ‘Return Of The Living Dead’ will most likely be a mosh-pit favourite within the live arena. On this second new offering spooky synths dominate and infiltrate brutal shredding for a punk-metal powerhouse that will have many fists pumping and some heads rolling…not literally, we hope.

The cover of Tom Petty And The Heartbreakers’ ‘Runnin’ Down A Dream’ is a ferocious slice of balls-out rock that should see Wednesday entertaining a few new fans by the time of his next release. The riffs are a particular highlight on this sleazy beast, and we are reminded once again just how tight these guys are as musicians and similarly, we are able to see just how varied Wednesday’s influences are. This is good stuff.

‘I Love To Say Fuck’ has long been a trademark W13 song, and rightly so. It’s a track taken from the good ol’ Frankenstein Drag Queens From Planet 13 days, and it will go down a storm when the band come back over here on tour. It’s more simple in terms of its formula than a lot of Wednesday’s other material, but it’s also one of the most affecting tunes within his effortlessly catchy back-catalogue. This one should inspire pissed off youths all over the globe for many years to come.

‘My Demise B.C.’ is the first of two acoustic tracks on this. It’s heart-wrenching and it shows off a different side to the artist. Indeed, this raw version’s pace would be more suited to 13’s light-hearted Bourbon Crow side-project. It’s certainly one of the most welcome surprises he has offered us in a long time, it’s a deep, dark and thoughtful lead in to ‘Skeletons A.D.’ which is equally as sombre and it works incredibly well to finish of this EP. ‘Skeletons’ was certainly one of the most heartfelt and unrelenting things Wednesday had ever written when it was released as part of his last studio album of the same name, and this acoustic version certainly gives it new life as the meaning and the vitriol behind the lyrics come across more blatantly than ever before.