This band immediately wins points with me, as they found their name whilst watching an episode of The Office (the superior UK version of the sitcom), where David Brent says the line: “Does it offend you, yeah?” But this isn’t a review of The Office; this is a look at the new album from dance-rock-whatever-they-want punk band, Does It Offend You Yeah? 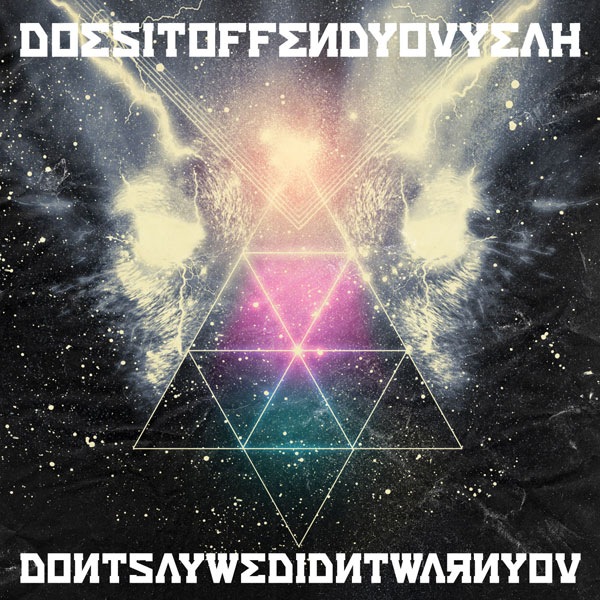 As soon as you discover that actually, the name of the band isn’t a socio-political statement intended to incite some kind of emotional response, and is rather the first thing they heard on television the day they were setting up their new MySpace; you stop searching for any hidden meaning or agenda and truly appreciate the music for being just what it is, and that comes in the form of a solid, entertaining and mature dance-rock album.

‘Don’t Say We Didn’t Warn You’, is a huge step forward after the previous offering ‘You Have No Idea What You’re Getting Yourself Into’, and is a piece of work that the band should be truly proud of. The mix of synth-driven melody and distorted bass, with electronic drum beats and indie guitar riffs makes for a satisfying recipe.

Although the sound has developed and moved in a different direction since the first album, fans will be happy to know that Does It Offend You, Yeah? haven’t forgotten who they always have been and probably always will be. At their core, songs such as ‘Wrestler’ and ‘Wondering’, which feature on the latter half of the album, are essentially electro songs with a bit of Prodigy influence thrown in for good measure. These songs on the album (though repetitive at times) are always entertaining, offensively catchy and would easily fill the dancefloor of your local alternative nightclub (Ed: good point – why don’t clubs play more DIOYY?). Though the songs are reminiscent of previous offerings; the first single, ‘The Monkeys Are Coming’, has a fresh take on the genre whilst still remaining true to their original style.

The obvious single choice on the album has to be one of the more indie-pop driven songs such as ‘Pull Out My Insides’ or ‘The Knife’; with sing-a-long chorus’, and verses that are riddled with catchy hooks, giving the synth a comfortable place to sit at the back of the mix. Though the band do adopt a mix-it-up approach to the creation of an album, with genres that often change from song-to-song, and even the inclusion of a rapper on ‘Wondering’; it never feels as if the band are confused about what sort sound they are going for, it just seems to work. The only moments that do suggest an identity crisis are the book-ends of the album. On both occasions an acoustic guitar sets the scene, while Radiohead-style vocals lead the opening track to a more Does It Offend You, Yeah? feel. The closing track called ‘Broken Arms’ feels altogether more like a Radiohead song, as the synth takes a rest and lets the distorted guitars and emotion filled vocals take centre stage. While this is the only track on the album that feels slightly off course, this for me is the highlight of the tracklisting. ‘Broken Arms’ shows off the bands other prominent influences, and is an example of where the band could move in future years; an impressive ending to a undeniably great album.