Dropkick Murphys – ‘Going Out In Style’ 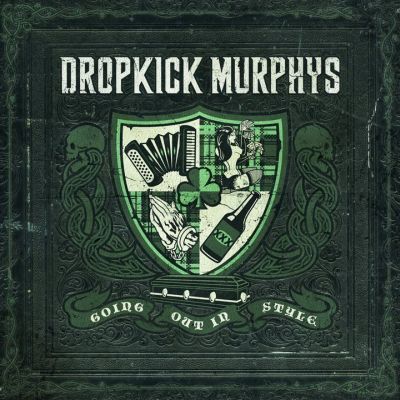 Drum beats resound and their familiar celtic riffs open on ‘Hang ‘Em High’, starting the album off in typical Dropkick style. Meanwhile, on ‘Going Out In Style’ the Irish punk rockers are accompanied by guest vocals from NOFX’s Fat Mike, The Living Dead’s Chris Cheney and actor/comedian Lenny Clarke. It’s a mimetic track which picks up with a fast-paced rhythm near the end and you can literally envision a group of Irish men and women with their Guinness clinking glasses and singing and dancing in a pub. Excuse the stereotype but…seriously.

‘Memorial Day’ holds uplifting and positive lines like “Come join the fun!” and “Hold on to those dreams / they are the one thing they can’t take away, no!”, while ‘Broken Hymns’ is reminiscent to their traditional gentle driven folk songs such as ‘Cruel’ and ‘1959’. Throughout their whole album they actually sing about everyday life situations, for many everyday people. Fears and hopes. It’s personal. You do get that working class “vibe” through it all. You know? lads meeting up after work at the pub talking about their lives.

It’s bagpipes ahoy on ‘Deeds Not Words’ and the uplifting chords and rocking action are back once again when the band shouts lines like “You’re a liar and traitor and now we’ve got the proof!” ‘Take ‘Em Down’ follows through the same vein with mandolin, accordion and hand-clapping and feet-stampin’ “Let them know we’ve got to take the bastards down!” They even released a limited edition ‘Take ‘Em Down’ t-shirt to raise money for the Workers’ Rights Emergency Response Fund.

‘Peg O’ My Heart’ welcomes special guest Bruce Springsteen which makes a very welcomed surprise! Boston native Springsteen, gets down and dirty with the band. Overall, this is an honest album that documents their own experiences, Irish family folklore and their fictional character Cornelius Larkin whose life the stories in the songs are based upon. “Cornelius has passed on to the other side and the album becomes a retrospective of his life. He’s one of those guys who immigrated to America at age 16, got drafted into the Korean War, married young, had lots of kids, worked hard, and lived a full life rife with different characters, ups and downs, trials and tribulations. Some of the stories are fictional, but most are odes to our grandparents, friends, and loved ones.” His story will be told through their website and even made into a book someday. Cornelius’ story, along with so many of the peoples stories, are sung and played with heart and integrity in ‘Going Out In Style’.