The last decade already seems a faraway place from our new and unreasonable one. Longevity in the music industry seems measured in months not years, more so than ever before. But what does that mean for a band like Funeral For A Friend? One band that can honestly say it did very well from that ten year span? What is left for them when so much has already been achieved? 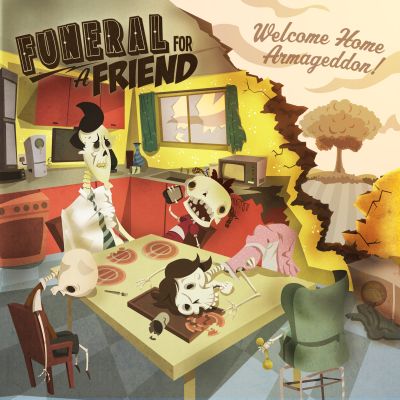 ‘Welcome Home Armageddon’ is the fifth full-length album from one of the UK’s most successful post-hardcore bands, and offers much the same experience as their previous work: pop-imbued metal that erupts into melodic choruses at every given opportunity. Tracks such as ‘Old Hymns’ and ‘Owls Are Watching’ contain belting vocals and gamboling tempos, the sort that was once the epitome of a newly shaped genre of underground rock. The grinding verse riff of ‘Front Seats To The End of the World’ is one of the album’s better moments, but is easily dissipated by the antiseptic treatment it receives.

What does the band wish to be in 2011? ‘Aftertaste’ is an example of a more impulsive and direct aspect: it’s energized and loaded. The vocals of guitarist Ryan Richards are the band’s hidden weapon. He needs to commandeer this band if any sense of chaos or distortion is to make itself manifest. Flickers of attempts at customising the Funeral For A Friend sound are noticeable – the gusto of power metal sneaks its way onto a few tracks, but they ultimately fall as drizzle and fail to ignite, into dead and unheralded spaces. Not one forward step has been taken with this album. Whatever you may call it; scream, emo, post-hardcore, it appears a genre trapped in its own aftermath, far beyond the death knell that bands like Funeral For A Friend have not recognised as having already sounded.