Single Review: I Like Trains – ‘This Skin Full Of Bones’

Home » Single Review: I Like Trains – ‘This Skin Full Of Bones’

This recent offering is the last gap of material tied to I Like Trains’ ‘He Who Saw The Deep’ album – a nine-track audio CD and an eight-track DVD. 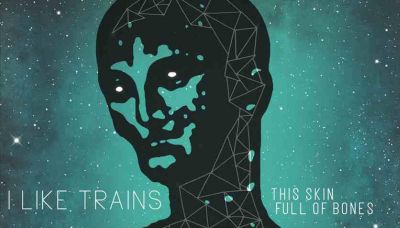 The third EP release for ILT, following two albums and eight singles, is divided into four tracks recorded at a music venue in their native Leeds, the three B-sides from the LP’s singles and two remixes.

The live recordings which commence proceedings have an appropriate resonance; the wistful, atmospheric melodies bound by vocals delivered in the spirit of Ian Curtis have a distinct echo the limiting confines of a studio often restricts.

These are tracks where the listener is invited to close their eyes and use the picturesque lyrics to create their own mind movies – in tandem with the films contained on the DVD. An imageerhaps most pertinently to the chorus of ‘Progress Is A Snake’: “As Europe slips into the sea, we could have saved a million more, we’ve made our beds and now we lay, a snake can shed its skin but never change.”

Moving onto the B-sides collection and the change in soundscape from spacious auditorium to claustrophobic studio is apparent. Guy Bannister’s vocals lose an element of their crisp Curtis-leanings, the instrumentation is slightly too polished; yet it fails to detract from the ethereal sonic landscapes ILT create.

‘A Kingdom You Deserve’ tips its hat to Radiohead in its guitar lines, chorus background vocals and drum patterns, while Bannister’s delivery on ‘Flood’ draws shades of Nick Cave into its flow.

The two remixes of ‘Sirens’, provided by 48K and DDR. The former throws effective and complementary dubstep squelches to the song, while the latter brings forward the drum patterns and jangly guitars to the foreground – both commonly shed unique perspectives on the track which stand in their own right with the original.

An overall impression gained from the ‘This Skin Full Of Bones’ EP is of a band reflecting on the music and performance they have crafted over the past couple of years and re-envisaging its produce to help steer them towards their next musical path. The signs sound optimistic for now and the future.