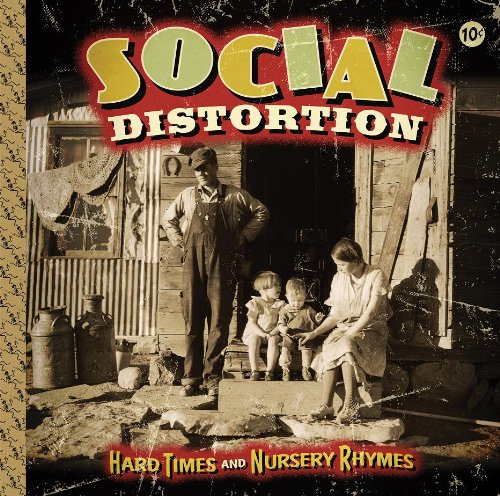 We have moved in and out of muscial trends through this band’s lifetime, however they stick vehemently within their 80’s comfort zone. Through seven studio albums, Social Distortion have made a few changes to the lineup in order to get to this point, currrently comproising of lead (and only surviving original member) Mike Ness, guitarist Jonny Wickersham, bassist Brent Harding and David Hidalgo, Jr. on the drums. The first track on this brand new record is headed by Ness on lead guitar; with his musicianship doing the talking. On this instrumental beast, he uses over 30 years’ of musical experience to give off a stellar peformance throughout.

The first vocal track ‘California (Hustle And Flow)’ paints a picture of a road trip on the back of a Harley down the US West coast. It’s easy listening, with playful bluesy riffs but at five minutes long, the track does drag a bit. Later, ‘Machine Gun Blues’ has a similar feel, with the guitar taking centre stage and the vocals acting to compliment them. Listening to this fairly uncomplicated album, one might imagine living through a 80’s summer – notably within classic and raw tracks including ‘Gimme The Sweet Lowdown’ which introduces lyrics like, “Walk on the wild side” and then, the Lynyrd Skynyrd-esque energy of ‘Diamond In The Rough’. Most of these songs give heavy nods towards past work (particularly in the intros) making this album easy to listen to with no suprises. For established fans this is fine, of course.

Meanwhile, ‘Far Side Of Nowhere’ follows with a refreshing change of tempo, although this has a very similar feel to ‘California…’ in that it takes us on a rough ride on the back of a Harley as we put “peddle to the metal”. The final three tracks follows a theme of reincarnation and ‘Still Alive’ is the most upbeat, and punchy of all that is offered on here. Social Distortion have come out with an album that in 2011 embodies what real, pure punk is supposed to sound like.