A progressive metal duo hailing from Calgary. The Unravelling formed when Gustavo De Beauville, an instrumentalist originally from Barbados met Steve Moore a singer already on the music circuit. Their début album ‘13 Arcane Hymns‘ is a concept album set to bring them to a worldwide audience. 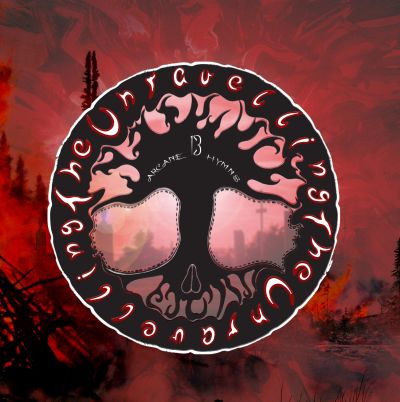 You can immediately feel the influence of Tool within the album. So heavily that the second tracks instrumentation could almost be pulled directly off of the band’s ‘10,000 Days‘ record. However, they are not just ripping Maynard James Keenan and co. off, It does feel that it is more of a homage to their sound. You can see other influences cropping up, the lyrics and story of the album are very Nine Inch Nails in nature, dealing with corrupted governments on a personal level (‘Year Zero‘). There is a tinge of System of a Down packed in there as well, with the politically charged lyrics and changes of tempo. The latter’s influence is most notable in ‘Last Rights Protest‘ and ‘Where Will It End?‘ though it is still subtle in nature.

The album is designed as a journey, to be listened to from beginning to end. Each track having its individual approach, while stylistically fitting within the sound and story of the album. From the break-neck speed of the opening track ‘Move Forward Until You Are Dead‘ to the chanting and cheering crowds of ‘Victory Song‘, this intriguing varies between schizophrenic speed and slow hooking grooves.

A viral video was recently released for ‘Fire Breather‘, showing clips of Tibet’s struggles against China. The track is the most unusual on display here, more dark and twisted than anything else on the album, It comes across feeling like an interlude.

On the complete flip side to that, ‘In The Safe House‘ is about as close to pop as this band gets. The lyrics are just as deep and meaningful as the rest of the album, but with a chorus that will have you repeating the word “Fire” in your head for hours if not days to come.

We want to give a special mention to the album artwork, something which is sorely overlooked in this day and age. All drawn and designed by De Beauville and fits in beautifully with the sound of the entire album. Intricate tribal drawings intersect the liner notes inside and add an extra touch that is missing from a lot of modern albums.

Overall this is a fantastic first effort. They sound like a band that is coming into their own. Admittedly they have borrowed heavily to get this sound, but they are still making it unique to their own style. Heavy enough to get the masses moshing, an undiscovered band perfectly primed to break into the international market appealing to fans of progressive, alternative and good ol’fashioned heavy f’in metal.