‘If it bleeds, we can kill it.’ Why is the same not true of tired franchises? John ‘Die Hard’ McTiernan’s 1987 ‘Predator’ wrong-footed and excited audiences by nimbly morphing from jungle warfare into horror stalk-and-kill dynamics and finally into a full-on creature feature. The 1990 sequel imaginatively moved the action to LA’s urban jungle, and offered intriguing glimpses of a greater mythos for the alien hunters. 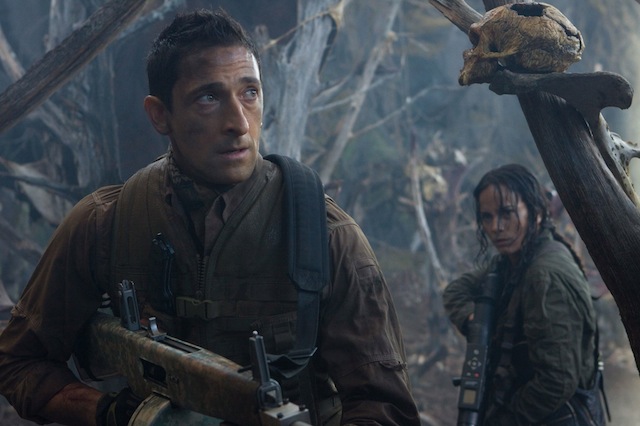 After the disastrous ‘AVP’ movies, everyone’s favourite mandible-mouthed, Rastafarian-alien carries about as much threat as E.T. So is it really a wise move for producer Robert Rodriguez and director Nimrod Antal to work the fear angle, when we’re already overly familiar with these villainous xenomorphs?

The film literally drops us into the action, with Adrien Brody’s loner soldier soon joined by seven other humans, most of them sharing one characteristic: a killer’s instinct. The jungle is intimidatingly exotic, and an atmosphere of mystery and menace is skillfully established as the troop try to get their bearings. As it becomes obvious they are far from home, the group make a series of increasingly gruesome discoveries, and the true nature of their situation becomes clear.

These early scenes are probably the most effective of the movie; the Predators don’t appear until surprisingly late in the story, creating a palpable sense of uncertainty and generating a few shocks and some real tension for the audience. Antal’s direction is admirably sleek; he has a way with overhead shots and widescreen vistas which is infinitely preferable to most directors’ current reliance on shakey-cam action and CGI pan-arounds. However, the characters are an unappealing bunch – the original film’s motley crue were broad but diverse, macho but sympathetic, and their deaths were unpredictable. This film’s victims aren’t always offed in the order you’d expect, but it’s hard to care when they’re so stone-faced, and even occasionally unpleasant (the Death Row murderer talks of “doing some raping”, in an uneasy attempted echo of the first film’s classically un-PC “pussy” jokes).

The second half descends into a virtual retread of the original’s climax, even cribbing elements from the first ‘AVP’ in a sure sign of desperation. As it becomes clear that the title and trailer for the film are somewhat misleading (anyone excited by shots of Adrien Brody with umpteen laser-sights on him will be sorely disappointed by this film’s paltry trio of Predators), a disappointing sense of déjà vu creeps in. Despite some clever touches – most characters are never named, as befits their cannon-fodder status, and both the humans and aliens employ some delightfully devious tactics – and a crowd-pleasing score that honours the immediately recognisable original’s, the film never really reaches the heart-pounding heights it should. The cast mostly overcome some clichéd writing (these guys love jumping to convenient conclusions and stating the obvious), and there a few satisfying set-pieces, one even echoing the original’s off-screen knife-fight. But this is ultimately a bit of a missed opportunity – it’s reasonably enjoyable and fairly well-executed, but could have been so much more. Hopefully the inevitable sequel(s?) can expand upon the ideas and promise which are occasionally evident here.