Old dog Sly Stallone continues his renaissance with a back-to-basics ‘80’s-style action flick. Where ‘Rocky Balboa’ showed he still had the heart to go the distance, and ‘Rambo’ showed he still had the balls to go way over-the-top, ‘The Expendables’ is content to just bring the cheese, in hope that the cast-list will paper over its audience’s lowered expectations. 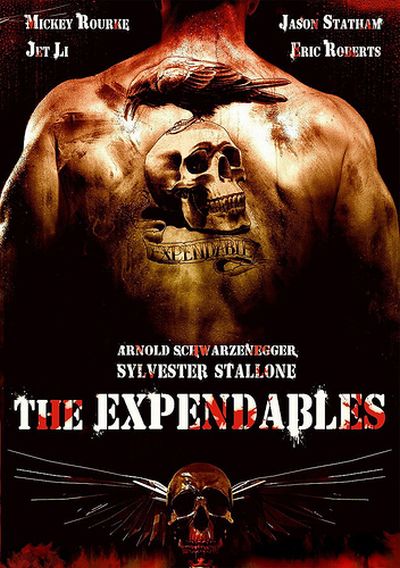 No-one should expect Shakespeare from a 100-minute film with a musclehead quotient that goes into double-digits, but surely the banter could’ve been better than the weak racism and painful young(er)-vs-old exchanges here.

Jason Statham jostles with Stallone for the lion’s share of screen-time, but his character lacks the easygoing charisma and self-deprecative commitment he showed in and to films like ‘Crank’ and ‘The Transporter’ series. Despite dominating several entertainingly ridiculous set-pieces – his machinegun-running-from-the-nose-of-a-plane is an early highlight, and a righteous suburban scrap gives his character some of the appeal lacking sorely in the others – he eventually gets lost amongst the other, bigger ‘actors’. These include goodies such as UFC legend Randy Couture and the enormous Terry Crews (whose scene-stealing from the likes of ‘Everybody Hates Chris’ and ‘Friday After Next’ is here sadly kept in check) and ‘baddies’ including ex-wrestler Steve ‘Stone Cold’ Austin and Dolph Lundgren.

While they look convincingly kick-ass, they are left with little-to-nothing to work with, and by the time they’re all embroiled in the increasingly explosive climactic rumble, the frenetic editing will have you losing track of what is happening to whom.

Other more established actors are left out of the action, but provide the film’s only worthwhile dramatic moments. Mickey Rourke’s tattooist has an enjoyable chemistry with his ex-comrades that should have been developed further. He also has the only emotional scene in the film, and somehow manages to transcend the material with it. Eric Roberts makes an excellent, lip-smacking villain, and despite his roots in the ‘No Retreat, No Surrender’ series, wisely sticks to chewing up the scenery and slithering around the other actors. Bruce Willis and the Governator himself, big Arnie, appear for brief but amusing cameos, the former managing to bring menace and guile to a minute of half-baked dialogue while the latter perhaps ill-advisedly nods to his real-life stature as a slippery climber.

Jet Li probably fares worst of all – as arguably the film’s most talented physical performer, he is disappointingly underused in that respect. His English also seems to have somehow got worse – he has been acting in English-speaking films for over 10 years now, but still struggles to deliver the simplest dialogue. The majority of the film’s fights are surprisingly reliant on wrestling moves – this is refreshingly ridiculous and a welcome change from the equally unbelievable martial arts displays of so many Hollywood movies. However, the tone is threatened by some seriously vicious violence. The atrocities Stallone concocted for his recent ‘Rambo’ are not in as frequent evidence here, but there are still enough brutal scenes of bodies being blown apart and necks being broken to call into question that ‘15’ rating. There is also a totally unnecessary torture scene that leaves a particularly nasty taste in the mouth, jolting the audience out of its easy complacency.

You may have noticed that there hasn’t even been any mention of the plot yet – to be honest, you’ll barely remember its details. Suffice to say there are exotic locales, foreign caricatures, political intrigue and corrupt businessmen. ‘The Expendables’ is a difficult film to judge – it does exactly what you expect it to, but not as well as you want. Despite its relatively short running time, it’s not as nippy as you’d expect, and some action sequences are over before they’ve had time to build while others rattle on for seemingly forever. The dialogue is ultimately what really lets it down – it’s not so-bad-it’s-funny, it’s just plain bad. You’ll spend a lot of the film cringing, and not in a pleasurable way. But if you can stomach the groan-inducing exchanges (to call them ‘one-liners’ would be to draw unflattering comparisons and give you false hope), there is plenty of old-school bang for your buck here. It’s just a shame it’s not as much fun as it could and should have been, and the blame for that has to lie with director, co-writer and star Stallone. It’s admirable that he’s chosen an original screenplay for his on-going comeback, but a little quality-control wouldn’t have gone a-miss.