Alice Sebold‘s much-loved novel makes it to the screen in a daring departure for one-time splatstick legend and recent blockbuster-factory Peter Jackson. The film follows 14-year-old Susie through her 1973 murder and into the afterlife, from where she narrates and subtly influences those left behind in grief on Earth… 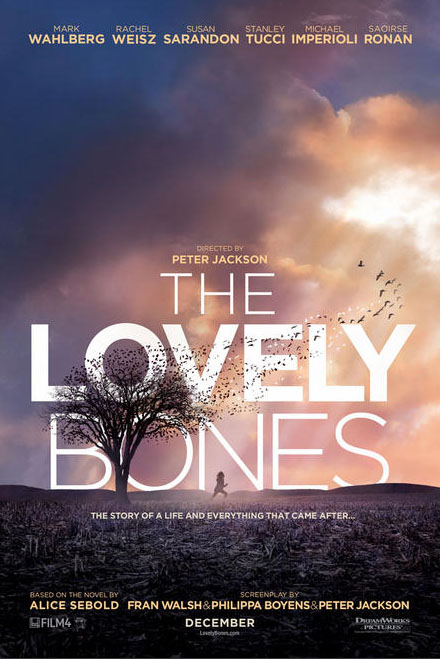 As her family struggle with the conflict between craving justice and conclusion and moving on with their lives, Susie struggles herself to come to terms with leaving the world behind and embracing her new existence. Meanwhile, others she did and did not know find her death affecting them in unexpected ways, and her murderer remains at large in the neighbourhood.

Jackson‘s handling of the period setting gives the film a hyper-colourful glow at the start, before effectively toning down to reflect both the characters’ perspectives and the changing times. Like Sam Raimi, his kinetic camerawork is a special effect in itself – as such, it can be distracting in basic scenes of character and dialogue, but it also gives other scenes a real edginess that suits the material. A couple of indulgent montages crop up in the middle – both in the afterlife and ‘reality’ – some cringeworthily below-par performances and over-acting threaten to undermine the dramatic scenes, but overall he nails his most human film since ‘Heavenly Creatures‘ with aplomb. After the bombast and empty bluster of ‘King Kong‘ (and, some would argue, the ‘LOTR‘ films), it’s refreshing to see him engaging so directly with such weighty issues and emotional stuations.

Some of the more risque – not to mention outright silly – moments from the novel have been excised, while some of the liberties taken with the nature of events and the story’s structure work better than others (fans of the book will likely have an extreme reaction to the film). It is surprising how the absence of some of the novel’s little details detracts from the potential poignancy: the significance of things like Susie‘s charm bracelet is hinted at but not built upon.

Mark Wahlberg isn’t exactly bad as Susie‘s father, but perhaps miscast (isn’t he always?), while Susie‘s posthumous relationship with her mother (an under-used Rachel Weisz) isn’t as powerful as it could have been. While Susan Sarandon is enjoyable, she doesn’t actually add much to the story – Susie‘s young brother Buckley‘s character development would have been more interesting to see. In general, many of the characters are too one-note compared to how they are developed in the book.

So it’s just as well that perhaps the two most important performances – from Atonement‘s Saoirse Ronan as Susie and Stanley Tucci as Harvey, her killer – are so well-rounded, really doing their characters’ difficult journeys justice. The film would, however,  have been even more effective if Jackson had fleshed out Harvey further, as the book does – Susie‘s eventual karmic acceptance would be more believable in the film if it portrayed the moments in the book where she is given insight into his past. Leading from this, the ending will feel particularly unsatisfactory for those who haven’t read the book, especially given how exciting some of the scenes leading up to it are.

The film has a few excruciatingly intense sequences peppered throughout, which really show how much Jackson can do with clever camerawork, editing and sound design. Brian Eno‘s score is also excellent, communicating the tinkling ambience of heaven as well as adding to the more threatening atmosphere of many moments.

Overall, there’s plenty of satisfying drama to chew on here, and many of the book’s themes are handled sensitively. Jackson balances the necessarily grim subject matter with some beautiful celestial imagery (audiences who complain about the sentimentality and sugary design of these scenes should remember this is a 14-year-old’s view of heaven).  He also manages to keep the audience on edge for much of the film, with menace lurking in both the hallucinogenic heavens and the mundane realities of suburban life. There is a real sense of the creeping feeling of potential danger that surfaces in everyday people’s relationships with each other and the places that they live in. Susie‘s sister’s actions, in particular, will have audiences squirming in their seats, in fear and frustration. While this adaptation may not fully satisfy diehard devotees of the book, it represents another unique and imaginatively realised experience from Jackson, reassuringly comfortable and impressive dealing with both the story’s fantastic and intimate aspects. It’s hard to imagine anyone else so wholeheartedly embracing the story’s darkness and hope – a difficult feat which deserves to be praised.