As the Marvel juggernaut continues, the job of this film could have been seen as simply to maintain interest long enough in the lead up to the next ‘Avengers’ movie, but director Alan Taylor had other ideas. After the solid effort that Kenneth Branagh made to establish Thor as a character up there with the likes of the easily likeable Iron Man and strong showings from both Thor and Loki in the Avengers movie, Taylor has a solid foundation from which to work from to deliver a humorous, action-packed experience that would be in line with most things Marvel-related these days (a lacklustre Captain America film aside) and the film certainly delivers. 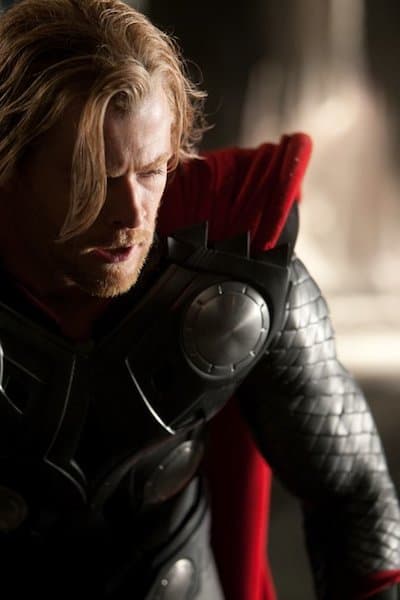 Chris Hemsworth’s Thor is interesting, likeable and has noticeably evolved from the brash, arrogant Thor of the first film. He’s more sarcastic, more mellow and contrasts brilliantly with Tom Hiddleston’s wonderfully portrayed Loki. He steals the show with a performance packed with biting dry humour and hidden menace, unveiling various different sides to a character that had previously had a somewhat one-dimensional quality to him. They manage to work in a lot of gags relating to past exploits, and Loki’s interactions with other, mostly returning, characters are by far the funniest and also the most entertaining, and his new relationship with Thor also adds a lot of comic potential, as well as being an interesting relationship to watch, seeing both of them touch at something close to reconciliation is a welcome change.

Christopher Eccleston’s Malekith is, given Eccleston’s considerable acting talent, pretty underwhelming as a villain. Underwritten as a generic revenge-seeking dark lord, Eccleston isn’t given enough to work with, and this is a shame because it feels like the character could have been much more devilish, much more impactful than he ended up being. Nonetheless, as a villain that serves to tie up various plot threads he’s perfectly functional, but not one of Marvel’s stronger villains. He does, however, fit perfectly in to Taylor’s murkier, darker, and distinctly more atmospheric tone well.

There’s still an argument to be had over whether Natalie Portman’s Dr Jane Foster fulfils any role other than love interest, since she still comes across as a duller presence than the likes of Hemsworth and Hiddleston, and even Stellan Skarsgard whose wacky scientist Dr Erik Selvig is very amusing and steals the screen from Portman and her counterpart Kat Dennings, whose role was gimmicky and annoying, even entirely unnecessary.

Overall, though, the film is a pleasant experience and a nice continuation of the second phase of Marvel’s grand plan, packed with enjoyable action sequences, crisp dialogue and even touching moments, as we come to see sides of the characters that we haven’t before. Admittedly it is goofy in that typical Marvel way, demonstrating at times the sort of superhero cheese that could be scraped off the film reel and dolloped happily upon a cracker, but in context it works well, the sort of thing that leaves a contented smile upon your face. Taylor also slips a number of nice twists in there to keep the juices flowing for the next instalment, which promises to be another action-packed affair. It may not be the best Marvel film, but ‘Thor: The Dark World’ certainly delivers enough to keep you excited and more than enough on its own to justify its quality as a sequel.