These aggrotech faves return to Scotland for a packed bill of stomp-inducing noise, their second visit to Glasgow’s trusty Classic Grand in under a year. While they’re still touring to support last year’s glitch odyssey ‘Making Monsters’, these shows are distinguished by the VFIM (‘Very Fucking Important Monster’) option, whereby fans can pay extra to gain access to a pre-show meet and greet and some exclusive merchandise goodies. This shows that Andy LaPlegua remains committed to giving his audience what they want, but it also smacks a little of opportunistic money-grabbing when you consider that it’s a good £50 more expensive than a standard ticket price, for the sort of thing that should really be a given for any band who cares about the fans. 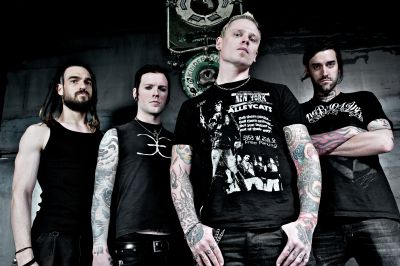 They’ve managed to secure some notable support for this leg of their tour in the form of cult US electro-rockers Aesthetic Perfection and Norwegian metal legend Mortiis. The former offer up a familiar but potent mix of industrial beats and synthetic riffage, giving a pretty full-on show considering their early stage slot. The latter has a sizable cult following of their own, many of whom have dutifully made it down in time to catch a set mostly consisting of their more synth-poppy recent material. This approach seems to split the audience, with many harking after their heavier past material, but Mortiis remain a worthy spectacle on stage, despite some frustrating technical problems and how unavoidably derivative their new sound is.

Most in attendance are saving their energy for the main event, and just as well because it’s a dance or die situation on the floor as soon as Combi appear, launching straight into a full-tilt bass-heavy barrage of pounding beats and throbbing synths. It’s interesting to note that the throng bounce along constantly throughout the entire set, where recent storming performances by the likes of industrial pioneers KMFDM and Skinny Puppy left much of the same audience curiously frozen to the spot, albeit in respectful appreciation. Maybe it’s the younger crowd members galvanizing the crowd into action or the more simplistic charge of Combichrist’s tunes, but the energy among the mass of heaving bodies is undeniable.

It should be said though, that when every track is desperate to be an anthem, they all seem blend into one another – there’s no light or shade, no subtlety or finesse, just the same cliched pent-up aggression and militaristic fetish nonsense churned out ad nauseum (there’s little hope of any semblance of maturity when three of tonight’s 14 songs have the word “fuck” in the title). The increased emphasis on a traditional live set-up – crunchy guitar, slamming drums, LaPlegua playing the classic rock frontman – is admirable given how this act started out (as a one-man outfit mainly devoted to electronic instrumentals), but it makes them somewhat conventional in current music terms.

Most importantly, the audience love every minute of the set, despite half of it being exactly the same as it was last year and the notable absence of some past faves like their breakthrough cut ‘This Shit Will Fuck You Up’. It’s perhaps a small mercy that the show stops well short of the 90-minute mark – many of those in attendance must have been nursing blisters and bruises by the time of the well-received, if somewhat anti-climactic encore. While it’s encouraging to see the many EBM devotees so thoroughly enjoying themselves, it may only be a matter of time before Combichrist find themselves having to stretch the formula in different directions, as LaPlegua previously did through his less generic work with Icon Of Coil; the “if it ain’t broke, don’t fix it” adage can only get them so far.