The Basement at the City Screen played host to a venerable feast of music on Monday night, concluding with the eccentric but never boring Curtis Eller as headliner. With his signature braces and banjo, Curtis Eller’s rare appearances in the UK are a treat, and with a twirl of his moustache, Mr Eller had this exclusive York audience in the palm of his hand. 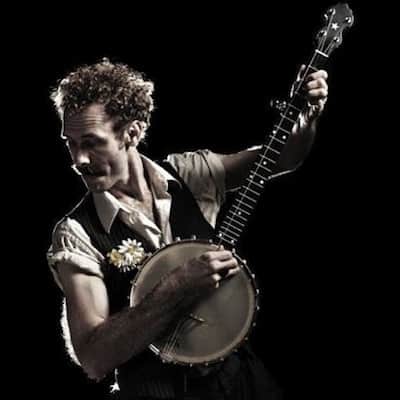 York acoustic favourite Boss Caine begins proceedings and impresses, showing once again why this American roots collective (helmed tonight by Daniel Lucas) is at the forefront of the York music scene. With songs about lost love, whiskey drinking and even a beautiful ode to fellow York musician Mark Wynn, Boss Caine is pure golden Americana with a Yorkshire twist. Lucas’s astounding gravel baritone reverberates through the intimate space and kicks the night into touch.

Emerging York band The Smoking Years are next to take the stage. With a haphazard shuffle of band members and a tentative retuning, this young group quickly endear themselves to the warm audience with their combination of heartfelt harmonies and violin-driven folk melodies. Main vocalists and guitarists Phil Jones and Sam Briggs share the burden of “front-man-ship” well, and despite excusing themselves of “a touch of a cold”, one can only imagine what wonders they’d weave on a good day.

Appearing from the backstage screen door, behind which he has been illuminated as a silhouette for most of the evening, Curtis Eller is every much the caricature his album covers, promo shots and interviews would have you believe. From the very first song, Eller high-kicks into action, taking this attentive but at first subdued audience by surprise. Songs like ‘Sweatshop Fire’, ‘After the Soil Fails’ and ‘Taking Up Serpents Again’, prove Eller is a yodelling, banjo-plucking raconteur about the America of old and the characters long forgotten by the baroque pages of history. Looking like a ‘Fish Called Wanda’-era Kevin Kline if he’d hitchhiked with a circus for a year, Eller snakes through the audience for extended banjo solos accompanied by musicians Bradley Blackwell and Matthew Rheeston on drums and double bass. The most poignant moment of the set comes at the end. Eller draws the room in to tell a heart-breaking story of oppression and death penalty punishment in North Carolina concluding with the song ‘Save Me Joe Lewis’. This results in the whole room whispering a tear-jerking chorus softly to a lilting banjo.

Refusing an encore but playing hard until the very end, Eller repeatedly asks the seated crowd if they’d like something “ugly” or something “beautiful” to listen to.  Eller simply quips “I put it like this, if the character of the song dies before the end of the song, it’s ugly. If the character is already dead long before the song, it’s beautiful!” Re-tying his Converse trainers one more time, Curtis Eller leaves the stage with a bottle of beer in his hand – ever the showman.