He may have missed out on this year’s Mercury Prize, but to see Ghostpoet perform on stage is a clear demonstration why he is worthy of high regard and respect. 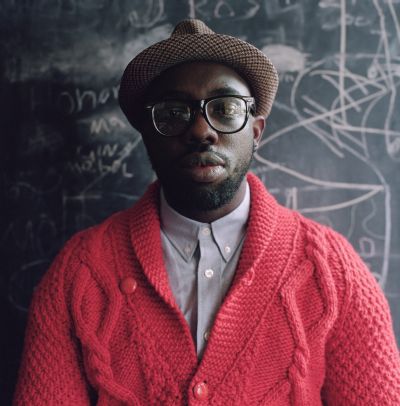 The atmosphere for the evening is set by opening act Middleman – yet another act first experienced by this writer at this year’s Galtres Festival. This indoor encounter proves an equally compelling draw; the band’s raw energy are less diluted and their booming bass beats retain their resonance in these different confines.

The funk rhythms laid down in ‘Chipping Away’ and ‘Snapshots’ certainly allure the audience, winning over converts to the cause as they accept the band’s invitation to move closer to the stage. Traditional set closer ‘Can’t Hold Me Down’ rounds off their seven-song performance and the crowd are eager to thank the band post-set.

Unfortunately, the amplification system’s bass tuning lets down the set by the literal middlemen in this evening’s gig. Breton’s music style, driven by bass synths and digitally manipulated vocals, is barely distinguishable in the room, making it an uphill struggle to properly tune in and begin to appreciate their performance.

The quartet’s minimal engagement with the audience creates a sterile, apathetic mood among Breton’s present core followers, compared the frenzy whipped up by Middleman and the building anticipation for Ghostpoet. There appears to be a sense of relief when the art band’s set ends after six songs.

In preparation for the main act, the stage area is reorganised; the podium at the back of the stage is cleared with the drum kit shifted to stage right. Technology installed and sound-checked, the venue suddenly darkens…

A roar erupts as Ghostpoet takes his position front and centre, and as soon as the opening bars of ‘Gaaasp’ spring to life, he makes the combination of live vocal and sampling effortless and cool. First song of the set done and dusted, he is quick to connect with the crowd; ‘I remember the last time I came here, I enjoyed it… it’s good to be back,” he addresses returning revellers and first-time observers.

Leading into ‘Run Run Run’, it becomes apparent kudos must go to his stage companions this evening, guitarist Chris and drummer Flo for their slick, capable efforts which thoroughly enhance the overall sound and finely complement Ghostpoet’s awesome lyrical and production skills.

A flawless mixed intro by the main man into ‘Survive It’ elicits an appreciative cheer from the audience; as its segues into ‘Liiines’, the fast, frantic drums and distortion creates a burst of euphoric movement on the floor. Ghostpoet tells the crowd, “I’ve got a sore throat… but you give me energy” as he links into ‘Finished I Ain’t’, but this hasn’t – and doesn’t – impact on his blissful vocal performance.

New single ‘Hampton South’ simultaneously pleases and intrigues with a blues-style riff delivered by Chris, and ‘Cash And Carry Me Home’ has the crowd raising hands and voices one last time before Ghostpoet calls it a night and receives a hearty, absolutely-deserved send-off.

All three bands certainly demonstrated their musical talents on this occasion; sadly, the time and the place were unlucky this time for Breton, sandwiched between two effervescent acts that sealed a solid bond with the crowd and lost in an overpowered bass ennui. This writer certainly hopes to take in the Breton live experience again in more objective circumstances.