Tonight is the Screaming Tarts’ first live showcase in York at The Speakeasy, and here is what we think of the glammed-up, rock bands that are on show this evening… 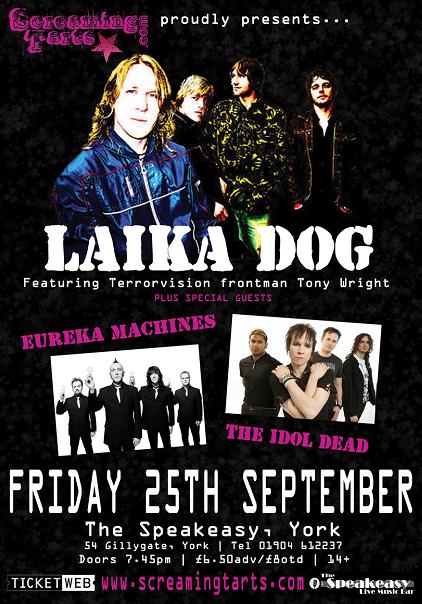 Eureka Machines open things up on this night of glam-tinged alt-rock madness and for us the Leeds-based four-piece are the most visually and sonically satisfying act of the evening and a great pick to open. Their addictive brand of strawberry flavoured rock madness left a tangy-sweet taste that shall remain with us. ‘She’s So Spooky’ is a strong standout that contains grinding guitars, hypnotic vocals and strong, uplifting beats. Imagine the glitter from David Ryder-Prangley’s crotch chucked in a blender with Scott Weiland’s mojo and King Adora’s attitude and you are only just scratching the surface. There’s huge potential here.

Next up, Eureka Machines take to the stage and having already rocked with them a month ago in York and called them our standout act on that night (with Sigue Sigue Sputnik) they did not disappoint. The strength (and style) of this band is undeniable and it’s a crime they are not more widely recognised as one of the most determined and entertaining alternative and punk acts on an international scale right now. Tracks like ‘Scream Eureka’ and ‘The Story Of My Life’ go down a treat and the band’s dedicated following chant along to the words and bounce around eagerly with the energetic beats, metallic riffage and classic punk-style vocals. As always, Chris Catalyst and his rockin’ band of men are on fine form and they have the crowd’s best interests (which are obviously to see well-dressed, sweaty blokes from Yorkshire playing punk rock) in their collective heart. Indeed, the most attractive thing about this foursome is their variety. One minute it’s heavy-as-hell rock-outs and the next it’s pop-punk wizardry. This diversity is readily displayed in the fact that the group pay a touching tribute to a friend with an all-out pop-rock powerhouse that leaves both the fans and the band out of breath before the finish. These guys could certainly be one of your best discoveries of the year…go see ‘em. Now….go look for tickets…do it. Okay? Good stuff.

The headliners Screaming Tarts were certainly hyped-up to us by the Screaming Tarts crew before this show and we are impressed by former Terrorvision-man Tony Wright’s raw and powerful Stone Roses-esque balladry. Tracks like ‘Down By The River’ and ‘Revelation’ resonate well with the die-hard fans who hang on Bradford leg-end Wright’s every word. That being said, it’s pretty straight-forward stuff and on a night that embraces glamour, alt-attitude and fast-paced rock sounds so readily, at times Laika Dog seem plain. On the whole though, this has been a great showcase of innovative Northern talent.