So, tonight we made our grand return to Preston – the city where we gained our fine journalistic…”qualifications”. Nothing really ever changes in this city – the weather is always the same (rubbish) and the constant buzz of student life and the determination and drive embedded within seems to battle against the faintest breeze of hopelessness. Anyway, the one great thing about Preston is that it is a hub for creative people that refuse to lay back and listen to people say, “there’s nothing to do in this bloody town” – one such person is Jane Dalton and her Goth and Industrial night Dark-Cide and Electro-Cide which has just found a new home at the very respectable University Of Central Lancashire venue 53 Degrees. Tonight, (DC‘s first here) plays host to the imperial Austrian Industrial machine Nachtmahr. 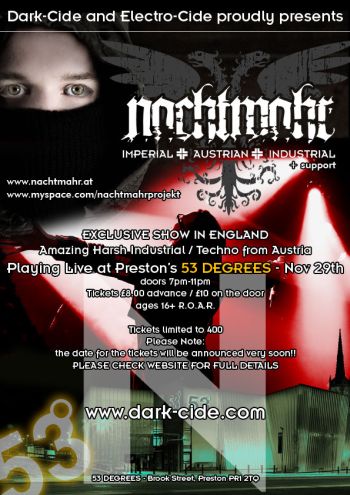 But first, Londoners Kommand + Kontrol take the stage and unleash their Armalyte Records-endorsed electro-punk venom all over the audience. The beats are prominent and David Chapman’s vocals are strong and defiant throughout. Particularly satisfying is the new EP’s title-track ‘Dead Ground Ahead’ which mixes brooding electronic elements in with haunting vocal tones. Another standout tonight is the angry anti-anthem ‘Fight It’ – a track that mixes elements of harsh EBM andheavy  coldwave Industrial styles. You will dig this band (and this tune) if you like anything from Combichrist to Funker Vogt via Tyske Ludder. Hopefully these lads will be up North again soon. This was a decent introduction and the reception to the aforementioned tracks was very positive – we’re looking forward to a full-length album in 2010. 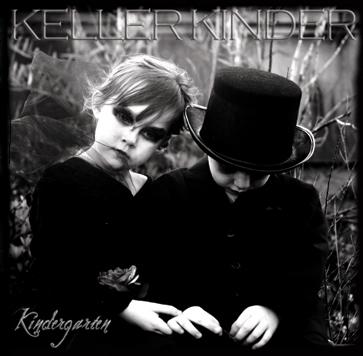 Next up are one of the North’s favourite band’s when it comes to Industrial – Sheffield’s Uberbyte are taking over the scene right now with two albums packed full of serious sonic anthems the likes of ‘Industrial B**ch‘ and ‘Total War’. With another album (‘EXS’) on the way there looks to be no stopping this techno-fuelled four-piece. Indeed, the new material sounds totally fresh and the band manages to seamlessly change the pace and tone with every song – an ability that many electro-Industrial bands lack. It’s also interesting to note how the unit seem to evolve every few months and how the members change roles and showcase impressive all-round musicianship – Deadboy (drums) has switched to working on programming and as a result there seems to be a lot more movement and action on stage and this is certainly appreciated by the eager crowd. UB have created an admirable reputation from themselves over the last few years with their Suicide Commando-meets-Nitzer Ebb-style vitriolic assault – there’s dirty Industrial beats aplenty and you’re gonna love it. 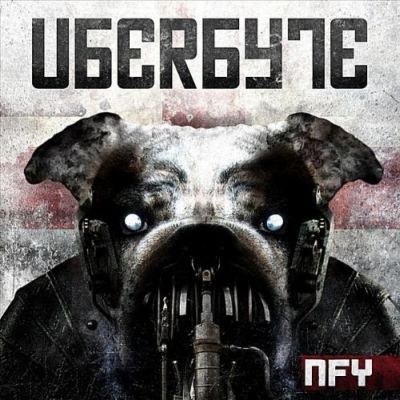 Tonight’s headline act Nachtmahr have also built themselves a pretty massive reputation for being one of the best live Industrial acts around, and really they do not disappoint. The band’s established club tracks including ‘BoomBoomBoom’, ‘Deux Ex Machina’ and ‘Morder’ go down a storm next to new material (and our favourite) ‘War On The Dancefloor’. The energy is there, the crowd are ferocious and the group are on fine form. On this evening Thomas Rainer and co. provide a show geared solely toward pleasing their die-hard fans and truly celebrate the opportunity they have. We were not prepared for the variety that Nachtmahr showcased here tonight and we were pleasantly surprised by their catalogue of accessible cyber tunes and rock band-like energy and interaction. Our moment of the night (and we are sure most other people’s favourite, came during the band’s final track which is taken from their forthcoming new EP ‘Madchen in Uniform’ titled, ‘El Chupacabra’. For this track Geoff Lee of Modulate joined the band on stage in tribute to the Mexican meal they shared together earlier in this evening (and of course, in honour of Uberbyte’s Charleen who has Mexican heritage). As the people on stage join in the frantic dancing that the crowd began, we leave with a sense that this is the start of something very special for Preston’s dark music scene. Keep it up. 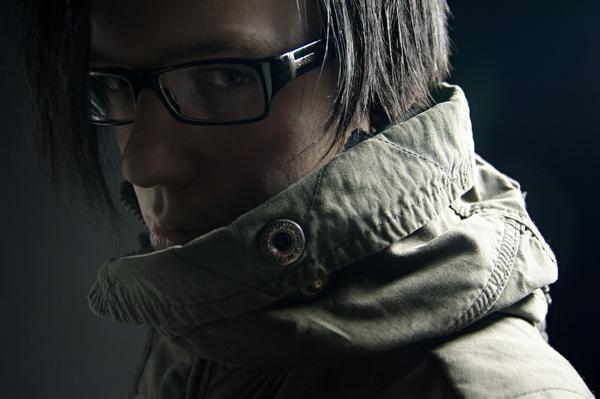 Watch a live video for Nachtmahr below: