It’s almost five years since Midlanders The Twang burst onto the mainstream, having spent six years crafting a classic indie sound that has so far led to two UK Top 20 albums – and another to come in the New Year. 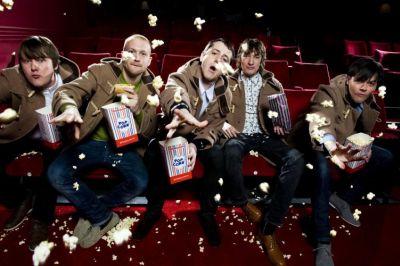 A sturdy crowd is already gathered as we arrive for the York gig of their tour; not just anticipating the lads from Quinton, but two impressive support acts who offer an apt foil for what’s to come. The first of whom is Andy Doonan, whose eight-track acoustic set saw accompaniment from two fellow band members.

Doonan, who states his pleasure to be a part of what he calls a “last-minute” gig, offers a sound with a crisp, jaunty vibe that suitably fits an Indian summer evening. His varied canon, including ‘Hollywood’, ‘The Woman That You Are’ and the always-entertaining tale of motorway rage ‘Malcolm’ are well-received and offer a mellow introduction before the amps are cranked up to eleven.

Up next are local quartet Littlemores, whose tight blend of ska-infused indie-pop is met with strong appreciation. The combination of relentless guitar and vocals by Conor Hirons, blistering basslines by Kai West, pounding drums by Jack Williams and the astounding accordion and trumpet of Ben Crosthwaite quickly brings jubilant dancing among the crowd.

Hirons’ bold and proud Yorkshire vocals on ‘Idle Street’ and Crosthwaite’s smooth transition between instruments on ‘Obsession’ stand out, but nothing can beat the stirring sound of the tragic ‘For The Lads’ and its sublime soundweaving to sum up why Littlemores are gaining critical acclaim and new fans by the set.

Suddenly, the lights dim, a bassline kicks into life, and The Twang take their positions on stage to a rapturous response.

The band demonstrate a knack of picking up the buzz amongst the crowd, enticing their participation and acknowleding it with regard and respect. Vocalist Phil Etheridge tells his gathered brethren, “It’s good to be here… it’s pumpin'”. We are told a replacement guitarist called Jimmy is standing in for Jon Simcox after he’s “bust his hand… working on his Shropshire home”, but the flawless, anthemic tunes sound no different.

The intimate surroundings of the venue helps give the whole set the aesthetics of what a proper rock ‘n’ roll gig should be – the audience relays chants as Etheridge and fellow co-vocalist Saunders exchange down-to-earth banter, making the gig feel like a catch-up between old mates. This is continually reinforced by shout-outs to York which meet with hearty approval. The real crowd pleaser of the night is ‘Either Way’, where every person holds arms aloft and belts out the track’s euphoric chorus, while ‘Two Lovers’, ‘Back Where We Started’ and ‘Paradise’ are equally and emphatically embraced.

The cosy atmosphere continues even when a member of the audience joins the band on stage, he’s not whisked away by security staff. He’s egged on by the band to lead an acapella performance of ‘Aimless With An Aim’, but one verse in, the band jokingly interrupts to tell him “Sorry, we can’t play that one!” The guy saunters off stage, not feeling he’s been wound up in any way.

In this day and age, the music industry sorely needs a band who can deliver the goods on record and on stage and prove they are on the same wavelength as their beloved fans. The Twang are ideal candidates to fill this vacancy.