By Editor
By Editor August 19, 2020 Listen, News
No Comments 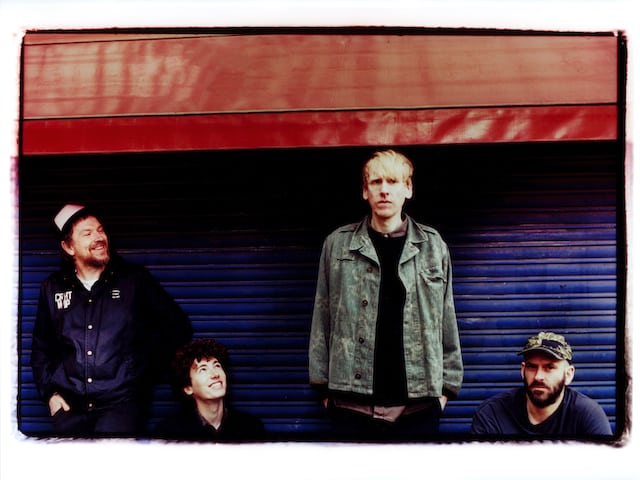 Huggy Bear led the UK’s answer to riot grrrl, inspired by the “seismic shock” of witnessing a Nation of Ulysses performance together and galvanized by Bikini Kill drummer Tobi Vail’s germinal riot grrrl zine “Jigsaw.”  In the 25 years since Chris Rowley played with iconic Huggy Bear, starting a new band hasn’t felt right. But after John Arthur Webb (Male Bonding), who Rowley met while picking up records at a Rough Trade shop,  asked if he wanted to play music together it “suddenly it felt super exciting.”  Years later, Webb and Rowley befriended a then-teenage drummer, Sonny Barrett, now 23, who worked at a different Rough Trade location. After a mysterious letter from Rowley arrived for Sonny at the shop, Sonny finally decided to check out Huggy Bear, promptly offering to drum in Adulkt Life. The Adulkt Life lineup was finalized when Webb enlisted his best friend and longtime collaborator, Kevin Hendrick—who has in recent years turned towards solo industrial noise poetry as Middex—on bass.

Now, working with these musicians and their combined perspectives, Rowley makes a striking return. The need for change that Huggy Bear sought is no less relevant today –  Adulkt Life inquires but offers no easy answers, instead instigating punk’s eternal invitation to see: “Wow, I should do something—make something, start a political party, just do something rather than not do something.” Their debut single, “County Pride,” offers a first taste of their frenetic sound. It brings together three generations of punk energy, creating a timeless sense of urgency.

“Early in Adulkt Life songwriting we wanted to make a song like Devo – something herky jerky with a future disco swing for a party crowd – but we were all too angry,” says Rowley. “The song is about the need to escape from hostile small town awfulness and the weird ways you choose to get out. It’s a dark ride with sparky edges through small town/new town bid for blood… Adulkt life haven’t learnt to be flippant yet just flipped out ….Ricochet and rockblast vs racism.”

Those who download “County Pride” from Bandcamp will also receive the first of three fanzines, which the band intend to “try and recapture the feelings not just in rediscovering music but all the other crucial elements that go alongside it, the passion to share and scrutinise and play poetically with brut force and argue.” More info HERE.