In our latest band spotlight, we chat to Elias Soriano from cult US alt-metallers, Nonpoint. 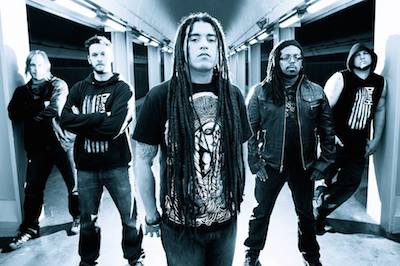 E] “I’m just sitting around the house waiting for my daughter to wake up. Last night was a late night of shopping. My wife works second shift so she doesn’t get home till almost midnight so we tend to do family stuff late at night. Not looking forward to transitioning that schedule when school starts. But it gives me my mornings to take care of band business and play a little Xbox.”

S] What experiences and ideas led to the creation of ‘The Return’ as a whole record?

E] “A lot went down for us the last record cycle. We had great success with the singles that we dropped at radio and media and critics seemed to have embraced our last record more than any other record in the past. So things are great for us and that feeling and excitement definitely transitioned us into the writing of the new record.”

S] Is there a track on the record, that you feel like perfectly defines where Nonpoint is at now as a band, musically and personally as well?

E] “I think the track ‘Razors’ on the record is where we are right now. We’re feeling like the heavier stuff is where we have the most fun. God knows it ain’t for the money that we do this, so at this point we just wanna have fun again. The vibe in the band, especially with the changes we’ve made, have just settled any worries or hindered any momentum. We all work hard and love to do it. So writing, performing and the business aspect of things just seem easier. It’s a good time for us all around now.”

S] How has this record pushed Nonpoint out of its musical comfort zone?

E] “We challenged ourselves more than ever this record. This record ain’t an easy one to play and perform live to say the least. But again, it’s a blast to play and watch reactions when parts come in unexpectedly. To say this is the same old Nonpoint would be a bad assumption.  Like my manager says, it ain’t nonpoint 1999 or 2006…it’s 2014.”

S] What’s inspiring the band outside of music, currently – think art, movies and such!

E] “The changes in the industry. We are in the middle of another format change. The digital world is slowly taking over the way we buy and listen to music. I’m fine with it. Probably because I can actually say I saw and lived through them all.. Records, 8tracks, tapes, CDs and MP3s. Trying to imagine what’s next. Are we topped out? It’s an exciting time.”

S] How do you look back on the success of tracks like ‘The Truth’ now, at this point in your career?

E] “It’s a bit of a blur at this point. It’s been 15 years of the grind. It honestly tends to all run together, but mostly keeps you in the now. Rock isn’t very protective these days of their favourites. They tend to be ready to find a song they like and move on to another subject. Not many people use music as therapy or food like in the past now that we got doctor visits and pills. It’s more of a background thing now. The few of us that do still feel that excitement when a band we love drops something new is dying off by the day. We seriously need a music revolution.”

S] How do you feel about Nonpoint’s place in alternative music in 2014?

E] “We’re cool where we are I guess. But don’t get it twisted. We dream of arenas just like every other band on the planet. Way I see it, fans dig us, radio plays us and labels keep signing us. So we can’t complain.”

S] What are the band’s plans for the rest of this year?

E] “Touring till the wheels fall off and hopefully selling enough records in the UK to get us over there for Christ’s sake!”