Ahoy, rock ‘n’ roll, where ya bin? And what happened to the eye liner and those ridiculous trousers you used to wear? Oh, you got rid of that sh*t? Thank God. Things are changing, and one of the cats at the forefront of this modern formulation of the music we all remember and love, is Pop Evil. We chatted with the vocalist too. 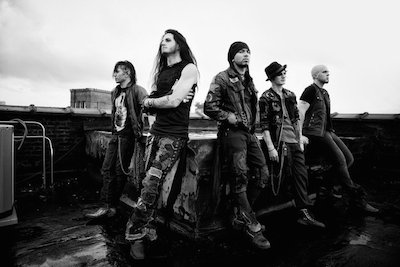 S] How did you enjoy the North of England during your tour?

LK] “Touring Europe is so important to us. We wanted to take the time to get out there and appreciate the cities, see the architecture, the similarities and differences, and it was incredible.”

S] You’ve had the fortune of touring with bands like Priest, White Snake, and Five Finger Death Punch, and have a great reputation with people. How do you reflect on that?

LK] “The journey has been amazing. Five Finger have become like big brothers to us, not just because they’re so amazing as musicians, but as people. I remember being up in Scotland and some of the crew guys were like ‘We’ve gotta go into Edinburgh, and see the Castles’ and we were like ‘Ah, but it’s like an hour away!’ but we ended up doing it and it was one of my favourite days of the whole tour. It was cold, it was rainy, but it was nothing like the US, and here in America that’s what you love about being over here. Everywhere you go everything’s older than the United States. Learning about European history, the great wars that have gone by. It’s just so important to actually see the places. It brings such an appreciation that the positive energy manifests on stage. You don’t get that at home! I think at some points in our lives we thought we’d never even get to see these places, let alone play our music in them. Then to be with bands like Five Finger who have taken us under their wing and given us opportunities, it’s overwhelming. You don’t have time to reflect, you just get those moments where you stop and say ‘Wow, I just toured from Poland to Glasgow’. Most people live their whole lives and don’t get to see half that.”

S] What themes are inspiring your music now, and how is that pushing you forward as a musician?

LK] “What inspired the new record was just the dark place we were coming from. We had band member changes. We were also trying to break out of our old record deal. The band has been on a steady rise. No matter what kind of adversities are thrown at us, the band’s been able to continue. We’ve always been an indi band, with the odds against us. We just make music, we don’t think about whether we fit in here or there or not. When we go into the studio, we try to find new ways to be creative. We all bring in new ideas, as all five of us are influenced by so many different bands, that we try not to discriminate. If the band can play it and do it well, we try and explore it. I think that was the advantage we had on ‘Onyx’, we were able to demo more songs than we had in the previous effort. When we finally had the success of ‘War of Angels’ we had a little more respect and credibility. At first we listened a lot, because we were coming in as newbies, whereas the second time it was like ‘No no no no. This is what’s working. This is what our live show is missing.’ We wanna take our fans on an epic journey onstage. That doesn’t happen when you’re an opening band, it’s more like ‘Prove it. Prove it. Prove it’. But now there is so much that we’re trying to do with our live shows, and the success of this new record.”

S] What sort of things inspire you and the band?

LK] “It’s gonna be interesting to see how much this European tour will affect our writing style. I think it’s being in tune with fans. Getting more popular means more fans, and having more fans means you hear more stories. Blue collar people needed some inspiration. We were growing up paycheck to paycheck. Disciplined families are like ‘Hey man, we’re not giving you nothing. You’ve gotta figure it out on your own’. There’s such an influence on raising a family and family pride in Michigan. The only thing that we had growing up that was consistent was our music, and I know that’s very transferable worldwide. Being from Michigan with the struggling economy, with that whole bad aura of energy is spread throughout the Midwest – people are looking for change, but it’s a lot of things that needs to change, and we’re just one band. Rather than try to be the band that solves everything, how about just ‘We are one of the bands’? Educating fans is so important for musicians of today. For instance, why the fuck would I tour with Shinedown when their fans are probably already fans of mine as well? I need to play for people who don’t necessarily like us right off the bat. That’s the challenge. If one percent of Five Finger’s audience listen to us, that’s one percent that wouldn’t have got into us otherwise. Everyone has emotions. This isn’t pop where you’re here today, gone tomorrow. Rock and metal fans are people with families who raise their kids on the music they grew up listening to. There needs to be greater searches to lift up the bands of today.”

S] How do you look back on the earlier form of Pop Evil and what opportunities that created for you?

LK] “We’re a totally different band now. We’re different people. We got brought into the game as a radio band, but now, once you’ve been around the circuit, your vision gets more direct as to who your target audience is, and we’re just focused on making great rock records. If you look at bands like Stone Temple Pilots – they’re a band who could strip it down and play an acoustic show, but they were also rockstars. The rockstar of today isn’t about the clothes you wear, it’s the lifestyle, that doesn’t change when you leave the stage. When people dive into the Pop Evil world, they understand that we’re just normal people from the midwest. There’s a thin line between being a rockstar and being an entertainer. We want people leaving our show saying ‘Wow, that was fun’, because rock and roll is supposed to be that way.”