What exactly is in a ‘genre’ of music? It’s not a term which guarantees quality, although it can be a category which ensures or indeed is a reason for increased or decreased record sales. Simply look at BandCamp or Soundcloud and find out how many bands are categorising themselves when it comes down to their music. The pigeon hole is too big for most journalists to be able to deal with and consequently music publications have slipped off the newsagents shelf and landed online where open minds await them. 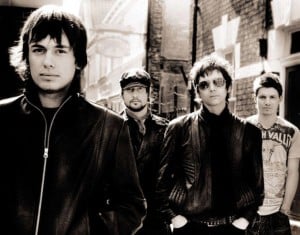 Let’s go back though to pre-ego, pre-marketing campaigns and pre-iTunes Charts. The devil and that crossroads, “rock’n’roll”! This is a tag any band can take on regardless of instruments used, songwriting styles adopted or drugs consumed. Akin to punk, rock’n’roll shouldn’t be looked at as anything other than ‘attitude’, ‘ambition’ and ‘chemistry’. This is a tag that sells gig tickets, merchandise and has its own “Hall Of Fame”.

Meet Black Night Crash, sons of the legendary York venue Fibbers and purveyors of anthemic, dynamic and exhilarating rock’n’roll music. Born out of the local music scene where jeans were baggy and hair products took the place of handwash in rehearsal room loos, Adam Bailey, Joe ‘Jobi’ Haining, Jim Gipson and Andrew ‘Mezza’ Meredith took flight with a quick succession of storming live shows in front of a breathless local, loyal following and in what seemed to be a pre-booked one-way ticket to international touring and festival dominance, all of a sudden came to a grinding halt.

Whether it was a mirror being smashed or not, the 7 year curse of silence from this quartet was metaphorically deafening. Then earlier this year, pictures popped up on Facebook of Adam, Jobi, Jim and Mezza in rehearsal for a “don’t call it a comeback” show at York Fibbers on Saturday 24th May. Within hours their fresh Facebook page had exceeded 300 likes and tickets were flying out of the doors at The Inkwell and online at the Fibbers website (buy tickets here). 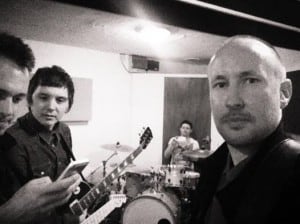 So, where did it all go right I asked Jobi?

The response to the announcement has been pretty overwhelming. We were popular first time round, but we were away a fair old time, and you wonder if people will remember. As individuals we’ve all had people mention BNC to us over the years, so we could see the name was still out there, but people’s evident desire to see us again has been a huge motivator while we’ve been preparing for this show.

What hasn’t happened to music in the intervening years that has made you feel relevant still in the alternative indie/rock scene in the UK?

Well nobody seems to have invented any completely new instruments or genres. People still enjoy well crafted rock songs played on guitars, as they have since the 1950s: that’ll never die, one would hope. In the last year or so there seems to have been a move towards more thoughtful, subtle music using a lot of keyboards etc., but the likes of Band of Skulls and Drenge are proving that people still want to hear big riffs. We can be subtle and/or noisy.

What do you think each of the members of the band today would say to their younger selves in the final month of Black Night Crash before the split?

Will this gig be a one off?

That’s absolutely not the intention. We have new material in the pipeline that is exciting us, and we’re sure it’s going to excite anyone who hears it as well.

There’s a lot that’s changed in local music scenes since your last show, how do you think people are going to react to your show in a heavily YouTube and mobile phone dominated live music appreciation market?

Hopefully they’ll want to get close, feel involved, and probably some may want to document events. We buzz off the feedback of our fans –there’s nothing to top that feeling of looking out into a crowd who are generally engaged, enthralled and excited by your music. As long as nobody starts filming on a tablet – that’s the worst, isn’t it? Put it away and have a bit of a groove.

From playing a Led Zeppelin cover last time round, if you were to do a cover again, would it be from the same band or have your tastes as a band changed?

Not all that much. Like anyone else who lives for music as we do, you’re constantly looking for the new thing, but ultimately you’ll always come back to your big loves and strongest influences. Incidentally “Good Times Bad Times” came up on the radio while completing this. Immense. Work like that never gets old.

You have wrote about it online in your own blog, but could you briefly explain why you never got rid of the old Burns bass guitar of yours and why you personally never joined another band?

I never get rid of guitars, I don’t know how anyone can. Music is like any other addiction; I’ll always be a bass player whether I’m in a band or not. The Bison is very special to me though; I’d wanted one for a while and miraculously found one in a shop in Leeds when I popped in while killing time waiting to meet Adam to go to a gig. It was just after BNC formed so seemed like fate. It’s never been played with another band.

BNC felt like the pinnacle of everything we’d been working on for years – Adam, Mezza and I had been musically involved on and off since our teens. I haven’t been in a band that didn’t involve them since I was 17 and could never imagine being in one. I wouldn’t even consider it. It’s an absolute honour to work with someone as talented as Jim as well. Most importantly they are all dear friends. Anything other than BNC would just feel like a downward step.

Can we expect black jackets still?

We’ve all kept our figures reasonably well, so you never know what old relics might be dug out of the wardrobe.

You’ve got 140 characters to Tweet a sell on this show to an audience who don’t know you, including a hashtag, what have you got to say to them?

Until the show, where can we get hold of the band’s music online?