After watching the party-lovin’ grindcore two-piece smash up Fulford Arms (sooooo good!), we thought it’d be a good idea to take Arthur Molloy (vocals, guitar) and Danny Krash (drums) outside for a quickie. Here’s what went down on the benches on that cold night in York… 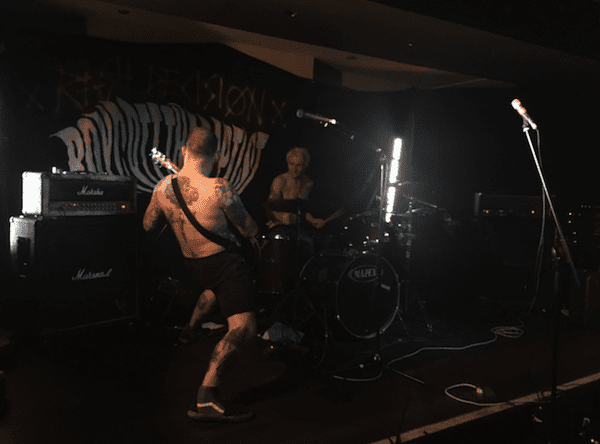 S] You guys are currently finishing up a tour with Rash Decision, how’s it gone?

A] This is actually the second full tour we’ve done with them since October 2015 – we’ve done Basingstoke, Manchester, Huddersfield, Edinburgh, Glasgow, Rhyl last night, which was spot on, and now we are here in York, and we’ve got Wigan and Bristol left!

S] Arthur, you actually filmed a music video for Rash Decision while on this tour, talk about that?

A] Simon [J Sky], the guitarist from Rash Decision just asked me if I could do it! I had a couple of drinks, and it just made sense. We used the first take of whatever I filmed, and it came out all right. Everybody seems to like it.

S] BTB actually have a new drummer for this tour, Danny Krash [from Knock Out Kaine] – Danny how’s it going?

D] Hello! It’s a strange transition for me joining this band, but I fucking love every minute of it! It’s completely out of my comfort zone, but it’s incredibly comfortable to play with him, funnily enough!

How did you find Danny, Arthur?

A] I found him in a gutter in Lincoln, and I thought, ‘Ooh, you’re pretty! You can play!’ Danny is in Knock Out Kaine, and they are Cock Rock as fuck, and I spotted him there, and asked him to play!

Talk us through the writing process, if there is one?

It’s quite easy, everything’s done in the same vein as Napalm Death! Short inspirations, and short songs. Best way to do it!

What’s the plans for the rest of this year?

D] We’re back on the road at Christmas!

A] Before that, we are playing a Halloween show in Leeds on the 29th of October, and then we have more gigs in early November on the 5th and 6th. We have a wedding gig on the 5th for a friend of mine, Chris! On the 6th, we are playing the Diabetes Punk Weekend Fundraiser in Norwich at The Owl Sanctuary for my friend Andy Bonney, who’s pulled that whole thing together! We’re doing two shows in one day on the Sunday, that Norwich gig and then an all-dayer at The Platform in Lincoln, which is above The Engine Shed!

I’ve only ever been to Sugarcubes in Lincoln! I stuck to the floor!

A] Dude! They haven’t cleaned that floor in ten years!

D] Actually! They do clean the floor. I used to work there! They had a fire back in the 1990s, and they haven’t refurbished it since. So, the reason that you stick to the floor is probably because of all the sap from the wood that just burnt! They do clean it, but they just clean it with all the old bits, and it doesn’t really work!

How did the band begin? Lincoln’s not really known as a mecca for heavy acts…

A] We used to be a four-piece, and then we were a three-piece, and now we are a two-piece, because of situations for work, money and people couldn’t really commit. It’s just easier as a two-piece! I mean, you’ve only got to ask one other person if they can do a show!

What advice would you give to emerging bands out there looking to do as many shows as you guys?

A] E-mail everybody that you can. Play as many shows as you can! Do everything you can, otherwise there’s no point in doing it! That’s the way it should be.

For more on Boycott The Baptist visit: https://www.facebook.com/BoycottTheBaptist