We chat to the members of Chinese Missy at Download Festival 2014. 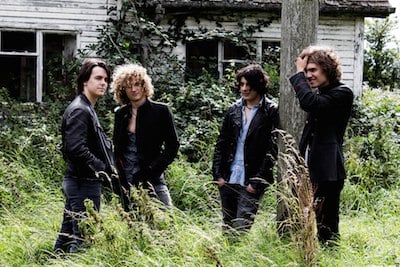 S] So have you been living the festival lifestyle since you arrived at Download?

B] “Oh yeah, been camping here since Friday morning, we can’t really understand why you wouldn’t. We were saying earlier how you know those band that just tour the festivals well when we’re at that stage, we’re just going to spend every weekend at each festival; we’re not going to just come for the day.”

T] “We have seen some classic bands this weekend, yeah, amazing. Status Quo last night; they were one of my first ever gigs for my 10th birthday and seeing them again was amazing!”

S] So what inspires your music in general?

B] “Basically we don’t pin-point bands, we just tend to just like everything! We were brought up on the 70’s rock and that’s why we often get the label of Dad rockers as a joke from quite a lot of our fans.”

B] “I definitely did not instigate this. But generally, we draw on a lot of older stuff and newer stuff…but it’s rock ‘n’ roll all round.”

R] “Ultimately, we want everyone to have a good time.”

B] “We went and saw Status Quo last night and we had a great time; that hasn’t been updated since the 70s.”

T] “We didn’t just see the Quo by the way, we have seen other bands!”

B] “And yeah we write quite a lot about politics and we like to bring up real issues. It’s not just lyrics for the sake of lyrics we feel like there needs to be something with a bit more drive to it. Our kind of line is ‘We aim to make both your mind and feet dance’. And I know it’s quite cheesy but that’s our quote, we want to have fun but we also …well over half of our songs are on political issues so we’ve got our next song is about the war and FGM [female genital mutilation] in the Congo. We’re working with a charity the Panzi hospital which helps women in an area where there is a lot of sexual violence women of sexual violence. It’s just an issue that we think is really important cos over the past 16 years 3.5million have died there and you know, if that was closer to home, there would be more of a deal made about it.”

T] “All the proceeds from that single are going to the charity. And next Autumn we’re planning on setting up a tour of schools.

S] So how did you come up with your band name.”

T] I’ll tell the first half of the story. So I was at a Chinese restaurant when this guy with really long curly blond hair came in and he was taking ages saying “Hmm there is nothing healthy enough on this menu.” And then in came this Scottish bloke and he was like “Get out the way”, having a go. And so it turned out the blond curly guy taking too long was Rich, the Scottish guy was Tom [Moore]. And then in comes Bello [Ingram] and he was like “Hey, cool it, you don’t know this yet, but we are going to form a band!” The restaurant was called ‘Missy’s Takeaway’ and obviously it was a Chinese takeaway, so Chinese Missy became the name. And then he was just looking around looking for someone else with long hair to play bass and saw me and said “You can play the bass. You know the one with four strings.”

B] “So yeah we vaguely knew each other before we formed a band. It wasn’t completely random. On the day of our first gig we went in through the back doors of the venue, when noone’s there, to set up. We all realised, as soon as we started strumming that we had gone in the wrong door and had accidentally set up in the back of a Chinese takeaway next door!

T] “It’s just all been so Chinese-takeaway-oreintated…we can’t get away from it, it’s destiny.”

B] “And I don’t even really like Chinese food! So yeah, we tried playing in a Chinese takeaway and we just thought it has to be Chinese Missy. Maybe you should hand out fortune cookies at your gigs?”

M] “Ah, that’s great idea, we should use that as our next band merchandise!”

S] So what are your plans post-festival?

B] “I don’t want to give too much away bit it is going to feature David Cameron, George Osbourne and Boris, and maybe a few other Conservative politicians. Not that we are massive fans. I mean you can just guess the content. The song is called ‘Blood On Your Hands’ so you can probably guess the theme.”

T] “We’ve actually given quite a lot away there. As you can tell we are huge Conservative fans.”