Reyka Osburn, the front man of California industrial / goth rockers Death Valley High is a happy man. He comes to meet me via the side door of Fibbers, York: from outside, I’ve been hearing the heavy pulsations of Killing Joke soundchecking, and as Reyka leads me in towards the room upstairs where he’s camping out and where we’ll conduct the interview – a rather euphemistically-named gentleman’s club above the venue, which doesn’t open till later – he stops by an open door by the stage, and we stand and watch a few seconds of the soundcheck. He extends his arms forward in a gesture which says ‘behold’ and the grin he’s wearing makes sense. 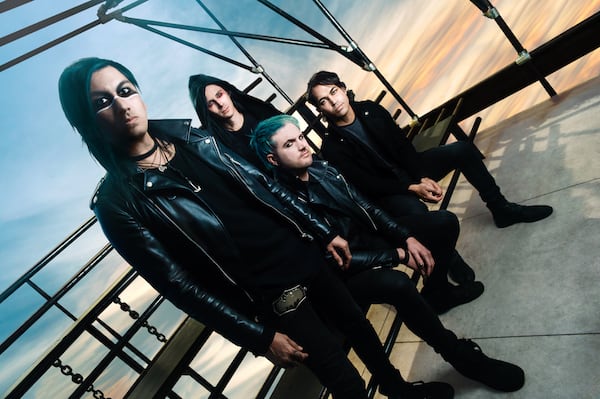 While the throb of Killing Joke’s soundcheck blasts through the floor, we begin by discussing the fact that this is the first proper UK Death Valley High stint, a couple of dates back in 2014 notwithstanding, and I ask him how the first two shows in Dublin and Belfast went. Some US bands find the nonchalance of UK, particularly English crowds, difficult to handle. He tells me that that it’s sometimes hard to gauge UK audiences, and I explain that it seems to be a common problem for American bands: it’s not that we’re standoffish or unappreciative, we just like to take it all in, and he gets that (he’ll also do a pretty decent job of getting some audience participation going later on, which is pretty impressive).

S] How different are the shows outside the US, particularly in the UK, in terms of audience response? How did the dates in Belfast and Dublin go?

R] Yeah, they’re quieter crowds. Afterwards, there were people that came up, right away, looking at getting some merchandise and whatnot, and giving us adorations and stuff, and that was pretty good.

You’ve toured pretty hard since forming in 2013, and the immediate feedback from a live show is certainly something that doesn’t come off the back of a release of a recording. From the live footage I’ve seen, you certainly seem to give it some. I take it you enjoy the whole live thing?

Yeah. It’s funny, ‘cause even back home, practicing and whatnot, when we start, we don’t wanna stop. It’s still part of our fabric, to play live and express ourselves.

Do you find the material evolves at all while you’re playing, or is it a case that once it’s done, it’s finished?

No, not really, it does tend morph a little bit here and here. You find something new that happens one night that maybe you wouldn’t have thought of before and it just happens, and you incorporate it.

You’ve spent Hallowe’en away from home. I always think Hallowe’en’s a good time to be a goth, but I get the impression it’s a much bigger thing Stateside. How have you found it?

You guys do fireworks and stuff out here. We got outta Belfast… we got outta there fast. So we got out at one o’ clock before everything went down, and I think it was a good idea getting out of there before it turned into hooliganism!

Staying with the theme, ‘Warm Bodies’ is something of a Hallowe’en track. Are you instinctively drawn to horror and the macabre?

Yes, that’s kind of our take on this. The Sweet Valley High is where we get our name, from the books, and the whole idea with the Tales from the Dark Side. Kind of like flipping it, on the other side of it, going to the underworld, that kind of thing, that kind of idea of the underbelly of your high school. That’s the idea of it, and so some themes are horror-laced, but I try to interlace that with some real emotions, like ‘Warm Bodies’ was like one of those revelations, like ‘Oh my goodness!’ I didn’t put this together until I started singing it, how humans and every living thing needs another living thing, and then so besides that, there’s the horrific side of it, where the vampires and zombies need warm bodies, and they feed off the warm bodies… there are all sorts of foreign, nasty things out there that want to feed off warm bodies, so… He laughs. So it’s kind of a tale of everything.

The new album, CVLT, is a stormer. I’m hearing a lot going on there, on elements of what you might call ‘vintage’ goth and contemporary goth. Which bands in particular from each wave of goth do you consider to be touchstones?

Killing Joke for one, for sure, he replies without hesitation. They have a huge influence on us. I always listen to that kind of stuff, like old Siouxsie and Bauhaus, and coming forward, it was always more the White Zombie, that kind of take on it. I grew up on Swans and things like that. I have this very cacophonous idea about music, it should be really noisy for it to feel right to me. I know it confuses a lot of people, it’s like noise going on.

Noise is good. I begin my next scripted question, in which there’s an observation Death Valley High’s sound incorporating industrial, metal, and more techno / dance elements, calling to mind the classic era of Wax Trax!, and I’m about to ask Reyka if he feels a particular affinity to that period, which feels like a time of innovation and the emergence of a new kind of crossover sound, when he interrupts and lifts the scarf covering his chest to reveal a Wax Trax! T-shirt.

I’m wearing a Wax Trax! shirt right now… Especially because of Wax Trax! and that kind of stuff, and then the whole Chicago guitar scene, it’s kind of intermingled, like Pigface was definitely one of the earliest things when I started wanting to perform and starting to do something, Pigface had just started, and I was like ‘what’s this? What’s going on here?’ It was something raw… it felt like that was where music was heading… and then all of a sudden, grunge flipped it all on its head, and then it got more and more dirty, just plugging into an amp and stuff like that, and then it flipped again, and it was all like The Prodigy and Chemical Bros and that kind of thing, and then that started happening… and then The Strokes came around and guitar kind of came more the focus…

Is it fair to say that with Death Valley High there are bits and pieces of everything in there, combining all of these elements all at once?

Yeah. The Faint is a huge inspiration to us now, and they’re kind of doing the same kind of thing, they’re making kind of electronic skrunk, I guess you’d kind of say.

‘Play Dead’ off the new album is essentially – and this is no criticism – a pop song. Would you agree that there’s no substitute for a good chorus?

Yeah. I love hooks. I’m drawn to big hooks. Whether it’s riffs, or drum beats, loops, y’know, that kind of thing. Something that just stands out, like ‘I love that song for whatever reason’ kind of thing, and the chorus is always, y’know, yes, it’s important to me. Or if not a chorus then an anti-chorus, what’s not actually meant to be the chorus, but you have something that resembles something, that hooks you, reels you back in. It’s always important to me.

You recorded the album in just six weeks with Ulrich Wild. What was the process, and what was the experience like?

Yeah, we did it pretty fast. We had most of the songs pre-produced, so before we even entered the studio we had a pretty good blueprint of how we wanted everything. We probably did some changes and everything while we were in the studio, but very little, like five to ten per cent was changed, very little, like things that dawned on us while we were working, like ‘wait a minute, how about if we did this instead?’ And that was in song structure. Everything else sonically, or whatever, that was down to Ulrich. The mixes and everything. That was how we got ‘Warm Bodies,’ the hardest one. We kept going back and forth on that one, and finally we got there, finally we nailed it on that one. So the second song that he mixed, ‘Psalm Bitch’, the song that he sent out to me, I was like, ‘Oh! Yep, print that right now!’ Once we got the palette and everything in place, it started going a lot faster. At the beginning we just did drums, and just pummelled right through it every day. And changes, we had to make them to the drums before it was taken down. Ulrich doesn’t really like to cut and paste, he likes a good, solid performance from beginning to end, so the crunch time was right when we were starting with the drums.

You have a huge tour ahead of you, supporting Killing Joke: is that daunting at all? The length of the tour, for a start?

Yeah. We were very excited to get it. We were thrown in the hat early on, so we had a lot of time to prepare. But preparing for a tour also means you’ve got to go make money, ‘cause you’re going to be broke for a while. So we were concentrating on that, and once we got the tour, we went and booked a plane ticket from Miami to LA… One of us is in New York, we had to get together and start rehearsing. It’s been a whirlwind since just before we started… But honestly, sometimes you just gotta pinch me. We had a Billboard premiere on Hallowe’en, just on Monday, and I was wrapped up in that, but I’m just sitting here watching Killing Joke doing their soundcheck and so, I’m like ‘someone needs to pinch me’. I can’t believe what’s happening.

I am looking forward to playing Italy, I just love the country. And the food. It’s really nice. But just being able to play the places and not visit or be there on vacation is something I’m looking forward to. So, Prague… we played in Prague before, once, but Paris. It’s going to be really cool. Paris. We’ve never set foot in France before. And obviously, we’re really looking forward to London.