In this band spotlight, Soundsphere magazine brings to you F.O.E.S, and their very own Joe Danher, to talk about their new E.P, ‘Ophir’. 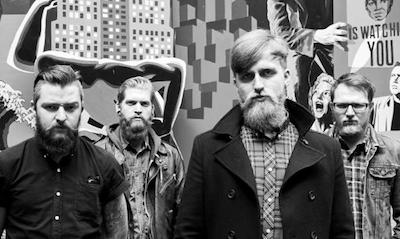 S] With F.O.E.S did you have a mission in mind, what was the kind of missions statement you set when you created F.O.E.S?

JD] “We’ve all been in bands together for years now, me and James, the drummer, have been in about three or four different bands and Chris and Josh have been in bands since they were in their late teens. We got to know each other through mutual friends and with bands in the past, we’ve done enough of it to know where to cut corners and where to say yes and where to say no, we just wanted to do that and maybe just write what we’ve wanted to write for some time now. We’ve all been edging towards this particular style that we’re doing at the moment and we just really wanted it to be our absolute best.”

S] Do you find this is pushing you in new ways compared to where you’ve come from before as a musician?

JD] “It’s definitely exciting, I think there’s a very natural camaraderie in the band writing-wise. In bands in the past we’ve played similar stuff but maybe not as complex or thought out in places, I think with this material we don’t necessarily hash it out there in the rehearsal room, we’ll get a few ideas and sometimes we’ll have to take them away and one of us will tinker with it on our own and then bring it back.”

S] What did you want to achieve in terms of themes and ideas and the impact on the listener?

JD] “We wanted everything to be quite large and cinematic and quite a lot of the reviews have picked up on that, which is great, so in terms of a loose theme that’s kind of what we were going for. I know with Chris, lyrically he always wants his lyrics to be immediately identifiable, he never tries to over complicate things.”

S] Is there anything outside of music that inspires the band?

JD] “Whilst I wouldn’t say anything specific, I’m a huge fan of film and regarding literature, Chris is a really keen reader and he’s good listener as well, so he’s always picking at things he can include in the songs.”

S] If you could rip out the soundtrack of an existing film and put your music over it what would be ideal for F.O.E.S sound?

JD] “It’s a tricky one that, I really love Darren Aronofsky films like ‘The Wrestler’ in particular, I think already the music for that is pretty outstanding, if I could claim a film it would definitely be that one.”

S] What’ve you got planned for the rest of the year?

JD] “We’re back in the studio in April, late April, that’s to record the follow up E.P, that’ll probably be another four or five track E.P. We’re booking another tour for September, around the release for that. We’re looking to do a cover as well, of Banks’ ‘Before I Ever Met You’, we’re looking to kind of dirty that up a bit and do our own spin on that.”