In our next band spotlight, we chat to James Grundler of Los Angeles’ Golden State about the inspirations and ideas behind their music. 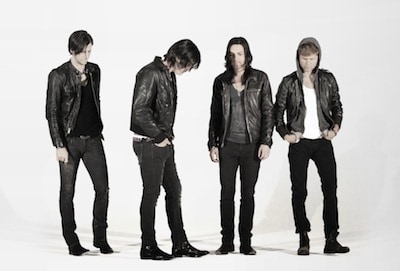 S] How would you say that you’ve changed and developed as a band over the time you’ve been together?

J] “Obviously, things develop over time and some would say ‘a fine wine gets better with age’. I feel songwriting had gotten so much better because when you are a young writer you tend to worry too much about the trends and not your heart. We’ve really worked on our communication with each other so we are more of united front.”

S] Talk us through your decision to cover ‘Obsession’ by Animotion? Pretty dark but very cool.

J] “I was recently writing with Holly Knight (one of the original writers of the song ‘Obsession’) through my girl who does all licensing stuff [Staci Slater], and we all thought it would be fun to attempt to do a very different version of that track. It was fun for me because it gave me a chance to try out a low register vocal lead which I don’t do very often.”

S] What about the influences for your debut ‘Division’ aside from “dividing yourself from the mass”?

J] “A lot of the influences for ‘Division’ come from the push pull of every day current events and the struggles we face, not being able to have a voice and share what we feel without feeling like you are a bad guy – which the main stream mead has so well conditioned the masses.”

S] What are the greatest challenges for the band at the moment?

J] “The greatest challenge is how to reach the people on a global scale. It’s quite an undertaking to get to that level, and with our tour to South America in April, we’ll be able to tighten things up before we come over!”

S] Outside of music, what would you say your biggest influences are – looking at film and literature particularly?

J] “Personally Im a huge fan of Stanley Kubrick. I love the aesthetic of his films. Ive been really into a new tv show called True Detective. Beautifully done. The writer of that show, Nic Pizzolatto has a few books with one particular called Galveston that Im into at the moment.

S] How are you excited about possible forthcoming UK dates?

J] “I couldn’t be more excited to finally come back to a place that has such a big influence on my music!”

S] What other big plans for this year have you guys got?

J] “We have the release of ‘Division’ in the UK and finishing up the follow up to that. Loads of touring and music in feature films and TV shows!”