In our next artist spotlight, we chat to Hull-based post-hardcore outfit, Late Night Fiction. 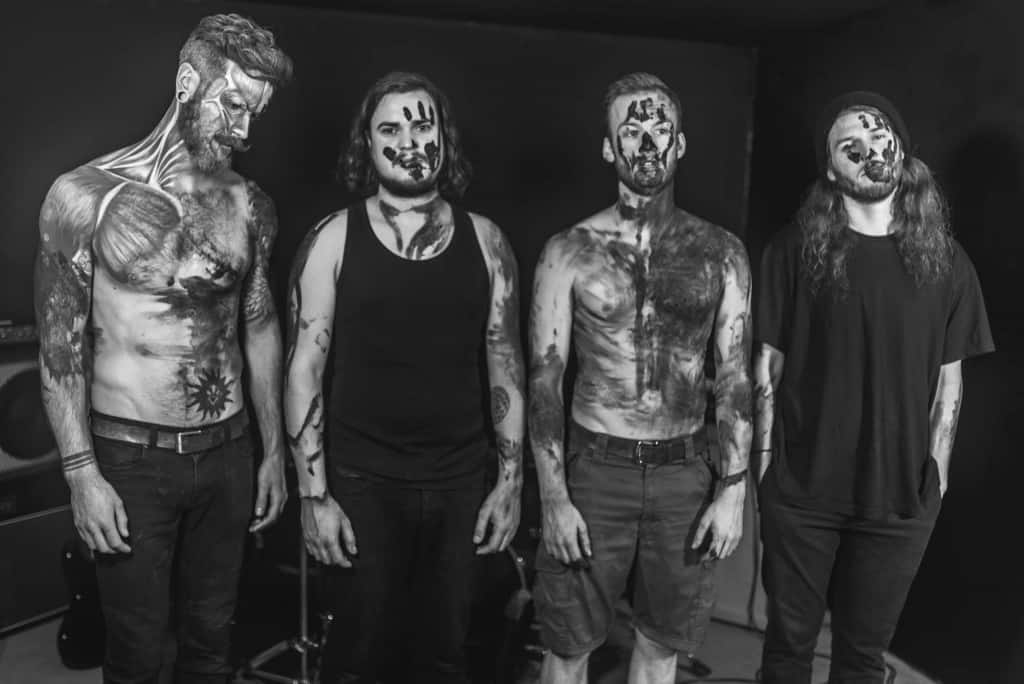 S] Hey guys! What are you up to today?

Josh] “Today I stayed in bed too long, then went to see my friend who lives on a barge. We had a BBQ and decided that his pet bunny rabbit wanted to join us, so we lined the bottom of a shopping trolley he’d just borrowed, put down some straw and all three of us had a great time.”

Phill] “Today I woke up feeling low and self-indulgent and smoked a cigarette. I then went for a drive whilst listening to Stephen Fry’s latest autobiography in audiobook form. He’s talking about the ‘cocaine days’ in the most charmingly pompous fashion. I bought tickets to Josh’s play ‘Austen’ at East Riding Theatre and am currently sat outside of the gym. It’s my day off so later on I might go crazy and have a glass or two of wine.”

James] “I’ve been at work. Tonight I’m on a Game of Thrones marathon with my Dad.”

S] What are the main inspirations behind, ‘Flesh/Bones’ – what experiences went into it?

Josh] “From a drumming perspective: Wanting to hit my drums really hard. And wondering how long I can go without using cymbals.”

Reece] “Phill tends to handle things lyrically, but the initial guitar ideas were meant to convey a mixture of vulnerability, anxiety and the strength to overcome it.”

Phill] “Reece mentioned a play between caustic and soothing, fast, slow, loud, quiet, and all of the usual variables that we like to play around with – life experiences went into this. We write as a four-piece, and I try to write lyrics to reflect the tone and feel of the song we have created. At the time of writing, ‘Flesh/Bones’ my mother was in the latter stages of Motor Neurone Disease, so I suppose they both reflect my anxieties toward that progression, our inability as a family to have any effect on the outcome – there is no cure or treatment – and the need to share these emotions with others – as a positive.”

James]  “This is the first ‘straight’ song we’ve written, there’s only one time signature change. We wanted to keep it quirky but hooky and driven. We tried to keep things simple and work on the layering of instruments and beats.”

S] Where have you been – what have each of you been doing?

Josh] “I’ve been back in Beverley, East Yorkshire, doing a play about the life of Jane Austen.”

Reece] “I’ve been in London. I work in mental health. Lately I’ve been trying to set up some other musical projects and planning a wedding, which is fucking nerve-wracking!”

Phill] “I’ve been lining up a Social work MA that I start in September, hoping that the band will at some point generate enough to enough income that we can do it full-time. I’ve been spending a lot of time with my father and family after the passing of my mum a few weeks back, and reading John Irving novels back-to-back. Also, lots of gardening…”

James] “We spent some of March out in a cottage in the middle of the Yorkshire Dales. It was miles from anywhere and we could make as much noise as we wanted. We got snowed in for a bit and wrote some sick shit.”

S] As one of the bands that has seemingly emerged with some notoriety from Hull over the last few years – what do you think of Hull’s scene right now?

Josh] “I wish I was more in touch with it. It seems to develop and change at such a rapid rate – which is great – and then there are much appreciated constants like Humber Street Sesh which is like a yearly summary of everything that’s going on. Which is why I never miss it.”

Reece] “From afar, I’ve heard quite a bit coming out that has impressed me, specifically Vulgarians, No Nothings, Tom Skelly. La Bete Blooms coming on strong of late. The strongest aspect for me though is Hull Noise Collective; they’re putting on internationally renowned bands – eg Birds In Row – for free, and nurturing their own thing, fully DIY. Special mention has to go to Squalords and Battalions.”

Phill] “It’s extremely strong, the culture is positive and, mixed in with the usual music scene bullshit, there is some serious potential. Unfortunately, you can be ‘kings of the Hull scene’, and yet no one outside the city would know who you were. It’s not a case of exclusion, maybe a lack of inclusion – as there are very few mid/large venues to accommodate popular touring bands. Hence few know, or even look at Hull for music, apart from those who live in Hull and the surrounding areas. Fingers tightly crossed that this will change with renovations and improvements around the city and massive positives from all of The Sesh, The Warren and the upcoming City of Culture year in 2017.”

James] “It’s incredible. Five years ago nobody had any national press or radio play, no one had a music video, now it’s the norm and the standard of music is amazing.”

S] What can we expect from you for the rest of this year?

Josh] “A couple more strong singles, a couple of upcoming festivals, a string of UK dates and another trip to Netherscar in the Dales to finish writing our debut album.”