We’ve always loved Losers, man. It’s great to see a new record, ‘How To Ruin Other People’s Futures’ heading towards the light of day. In the first chat we’ve had in a long while, we talk to Losers’ Tom Bellamy about music and other, deeper inspirations. 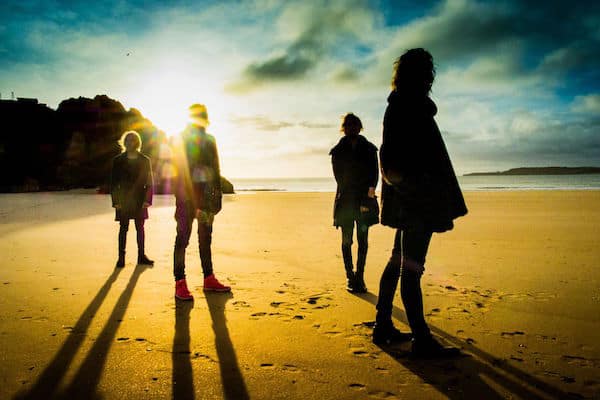 They know how to do breakfast in my neighbourhood. A good breakfast keeps me focused while I’m at the studio which is where I am now. We moved into a new studio back in March and I just finished putting up the last acoustic panel yesterday. Moving studio was a serious upheaval, I think I’ve lost half my body weight and bought half of our local hardware store.

S] Talk to us about the development of the new album – what were the biggest challenges, are you still between Berlin and London all the time?

Paul and I decided to get out of London after we were offered the chance to come and work at a monstrous residential studio an hour outside of Berlin. It seemed like a good idea at the time, to pay half our London rent for a space literally 100 times the size of our modest home studio in Manor House, to be able to make music around the clock in the middle of a forest without any of the constant harassment that London threw at us.

We were only meant to be staying for four months. Four turned into six, six into nine. Next thing I know I’ve got a german telephone number and a daily knowing wink from the lady in the local supermarket. The isolation was the hardest part. Essentially, Paul and I spent 18 months in solitude. Eddy came to visit for a few days at a time every couple of months to inspire and to reign us in, to give us focus and to re-energise us, which he did with aplomb. I was battling alcohol addiction the whole time which was a dependancy hellbent on destroying my life. Luckily, with support from my bandmates and the people nearest to me, I made it through, but it wasn’t fun at all and personally, this album reflects that battle for me.

S] What’s everybody been doing outside of Losers?

Paul and I wrote an album’s worth of other material with our drummer Dean [Pearson] for another project which will hopefully see the light of day, one day. I also produced an album for Paul’s other band, Young Legionnaire which we’re both very proud of. More importantly, I became a father in January to a beautiful little girl which has brought me immense joy and made me even more focused on my music. I shifted up a gear I didn’t know I had.

Eddy is still doing The Remix on Soho Radio every Friday night and helping organise Secret Garden Party, the greatest non-festival in the world. A&Ring an album for Jagermeister called Remix Of A Classic, working with Starship Universe (who organised Tribal gathering) on electronic music tours and festivals. Eddy is also the chair of the Music Board at CALM.

S] Which track from the record do you feel like perfectly defines where you are with Losers as a band right now?

Where we are right now? Making music for me is always odd in terms of where you’re at because by the time an audience hear your “latest” material, what that actually means is that people are listening to music that resonated with you when you were writing that material, which in this case, takes us back two years. I would never want to take that long writing a record again but unfortunately sometimes life gets in the way.

The sound of our records is defined by our situation and driven by our emotions. My situation couldn’t be more different now, compared to where we were when we wrote this album. For me, there isn’t a song on that album that defines where Losers are now. We morph as a band so quickly it’s hard to keep up sometimes. We are always looking forward.

S] Talk us through the title, how’d you come up with it?

The title was something that I wrote down on a piece of paper after feeling particularly low about a personal situation. I don’t really remember much about it. It was at a time when I was drinking heavily. I left it on the studio desk and Eddy found it when he came over to visit one time. It just seemed to embody the overall feeling we had as a band about our personal struggles, which influenced the bulk of the material on the album.

S] ‘The Not’ and ‘Chainsaw’ are big faves of ours, can you talk us through the personal situations that inspired both?

‘The Not’ was the first track we wrote after turning up to the studio. On arrival we were welcomed with an array of new toys to play with and almost before unpacking, Paul and drummer Dean embarked on some mad vintage synth jam before I even had time to set up the studio.

Paul played me his phone recording of Dean’s synth baseline and my eyes just lit up! Lyrically, as with a lot of the album, the song reflects on the ramblings of a miserable failure of a human being. A Ruiner. Someone who, in my head, has lost everything and has been banished to a desert island waiting for a boat that never comes. Someone so poisonous he only needs to step into a room to cause damage.

Conversely, Chainsaw was the last track written for the album. After many melancholic months in our toxic bubble, Chainsaw was screaming out to be written. We wanted something, high energy, furious, bitter and enraged. Something to get your teeth into. A song, foaming at the mouth. An opportunity to face the demons and fight them. Chainsaw is the incensed phase of realisation.

S] What was the hardest track – either personally, or professionally – for you guys to develop on the record, and why?

Most of the songs came together pretty quickly. There was so much pent up inside us that everyday in the studio was like a session in therapy, and the creativity just gushed out.

Exit Plan was a bit of a problem child. Starting as a piano piece that I wrote before moving to Germany, it went around as many houses as it could before, after months of persuasion, Eddy reminded me how good the original demo was and so we pulled the whole track bar the piano, vocal and a few bits of atmospherics. It’s important to go on these journeys, as long as you don’t get lost along the way.

S] What were some of your favourite moments from the creative process of this record?

Alas, It wasn’t all doom and gloom! We were incredibly lucky to have such an amazing space to work in. We had a beautiful grand piano in the lounge which provided many an hour of blissful companionship. We were also surrounded by forests and lakes, not to mention wild boar which we would gaze upon nervously as we chowed down on their relatives around a fire pit in the garden. We would quite often take our little dinghy down to the lake and let ourselves unwind.

S] Is there a UK tour in the works?

There will be shows coming up in the Autumn, I can’t really say much more than that at present.

S] How important is it that you maintain a consistent mix of electronic music, and the rock sound that you established with your previous bands?

I am lucky enough to be in a band with people who have open and eclectic taste in music. We love it all. Yesterday in the studio, I listened to Snoop Dog and then Tyler The Creator. My latest ‘starred’ artists on Spotify are The Animals, Bananarama, Martha Reeves and the Vandellas, Kelis, James Blake, Phil Collins, Algiers and Suuns amongst others. I think that says it all.

S] I know we’re only on the second record and all that, but what would you like the Losers legacy to be?

I guess I am most proud when I remind myself that Losers are out there on their own. We never tried to play anyone else’s game. I can’t think of any band that sounds like us. We persevered and we worked hard. We wrote music for ourselves and somehow it found it’s way into the headphones of the people who support us now. It is an incredible situation to be in and we thank everyone for their continued support .

Cheers Dom. Be well and see you soon. Tom