We chat to Jarrod Medwin from Massive about the band’s influences. 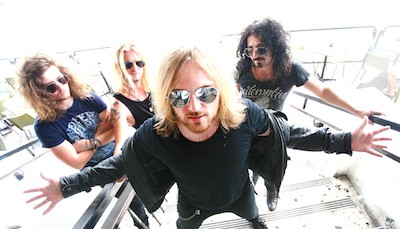 S] How are you guys doing today – set the scene?

J] “I’m currently in my hotel room in Amsterdam with a mega hangover. We had a night off last night and needless to say things got rather messy.”

S] What motivates you guys outside of music – think movies or people for example?

J] “Anyone who works hard to achieve their goals and is the best at what they do. Cameron Crowe, Jerry Seinfeld.”

S] What have been some of the highlights from the UK tour?

J] “The tour has been awesome. We’ve had a great response from people who have never heard of us, as well as everyone who has the album and are seeing us play live for the first time. Rock City, Nottingham is one gig that springs to mind.”

S] How do you look back on the success of tracks like ‘Dancefloor’?

J] “That song is definitely a crowd favourite. The energy in the room lifts as soon as we start playing it every night. One guy the other night came up to me and said he was in a cover band and they’ve been playing it. That’s crazy!”

S] If you could come up with a Frankenstein’s monster for the Massive sound – the head of The Treatment, the balls of Airbourne and the feet of Led Zeppelin, for example, what would it be and why?

J] “I would say the head of Guns n Roses, the balls of AC/DC , the debauchery of Motley Crue and the legs of Zeppelin. So you pretty much got it right there!”