By Editor
By Editor September 27, 2016 Band, Spotlight
No Comments

In our latest band spotlight, we chat to Craig Sharp, frontman of Spoilers about music and inspirations… 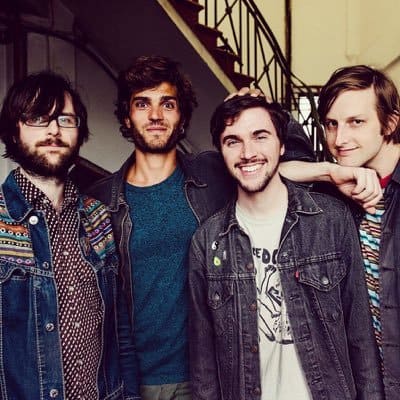 S] What personal experiences and ideas inspire the Spoilers sound?

Spoilers came from a bit of a contradiction… Wanting to play energetic loud noisy riffs but wanting to play catchy melodic stuff too. Mixing the dark and the light.

I was in a band called Ice, Sea, Dead People before Spoilers, you can’t really do ballads in a band with a name like that. Not that Spoilers do. I don’t know. There’s always a driving momentum and energy going through our songs but it’s generally fairly varied. So, I hope that’s vague enough for you…

S] What about ‘Imminent Future’ – what went into that, in terms of its themes and ideas?

It’s a really personal song about my baseless optimism for rekindling a relationship. I was in a pretty low place when I wrote it. I remember recording the demo in my bedroom, singing into the mic with my head on my desk. In the end I had to edit out all the sighing I was doing in between words as it was a bit much! Ha. I didn’t know I was capable of being that emo!

Musically I just put my hand in a weird shape to make a chord, and tried to play bass notes whilst strumming this single chord and that was how the intro and verses came about. I didn’t realise this, but we went through five different versions of this song – we casually toyed with it for over a year, even though I’ve always been happy with it! I won’t bore you with the details but the final thing on the album is basically a mix of a live recording we did with Rory and my bedroom demo. And now I’m not 100% sure how we’ll play it live! But I’m really happy with it.

S] What were some highlights of recording, ‘Anti-Vibe’?

Listening to Try Try Try for the first time in the studio and hearing Mario’s drumming. I think he joined the band about 2 months before we recorded that song and every time we jammed with him he got better and better. By the time we recorded he was incredible and everything in the band just suddenly clicked.

It was really fun recording with Rory, he’s a lovely guy and obviously we’re all really proud of how the album sounds and that’s thanks to all his hard work. Recording the whole thing on a boat is a different experience I guess. I think we need to mention the Diner right in front of the bridge to the boat, though. That place is great. Fat Boy’s Diner. It was in Sliding Doors.

S] What motivates you outside of music, think films, or people and places?

I think our main motivation is to play outside of England. I love playing in Europe and want to do it all the time. In a non-musical way, I really enjoy making things. And seeing lots of something. So making records is pretty rewarding for me.

Other than that, I really like artists and performers who can play with audience expectations. People like Andy Kaufman, Ben Wheatley, Jonathan Glazer, the Coen Brothers, Ian Svenonius.

S] What’s been a career highlight for you?

I think it was supporting Shonen Knife in Bedford. I just had so much fun that night and my mum and girlfriend were in the audience which was really cool. We also played with Vertical Scratchers quite early on, which is one of John Schmersal’s projects. I’m a big fan of Brainiac, and Enon so that was a big deal for me.

Making our tapes was something I was super proud of too. It’s a real experience, designing the sleeves, getting them printed, then cutting and folding them, sticking labels on the tapes, etc. then finally… finally seeing them in a record store. I’ll always love that experience. Our LPs are arriving in about two weeks time and I’m dying to hold the thing. I still have to get the artwork printed somewhere, then we’ll have to cut and fold them ourselves at our studio sometime. Which sounds like effort but Spoilers are all nice dudes and it’ll be fun.

S] What would you say your mission statement is as a band?

These are the mantras of our band. The first one is quite new to us. “Please buy our record”. “WWFD?” (What Would Fugazi Do?) and “Ride the Anti Vibe”.