Following the release of their fourth studio album, Sonder, we caught up with Tesseract and White Moth Black Butterfly frontman, Daniel Tompkins, at Download Festival 2018 before their spectacular headline show.

Soundsphere Magazine] So, we are here at Download 2018 and we are joined by Dan from Tesseract, How are you doing, man?

S] Are you looking forward to your show today?

D] Ah, very much so, man. This is, like, a big deal for Tesseract. I mean, headlining the Dogtooth Stage, you know? For a UK metal band headlining any stage here, I think, is a bit of a statement. We are really proud about that. Two years ago we played on the second stage, the encore stage; huge crowd! We have got a small tent tonight but I think it’s going to be really busy.

S] Congratulations on your latest release, Sonder, you must be very happy with the response it has received.

D] I am actually, yeah. From a personal opinion on the album, I’m not totally happy with it, mix wise. I feel we needed a bit more time to draw the extra special bits out of it but the reception has been absolutely mind blowing! I remember when we released Polaris, which was the last album, we went straight on tour in the States and the reception was a bit mixed. People wasn’t really responding too well  to it in terms of them not singing the words and that kind of thing. This time around, bearing in mind we released the album on the 20th of April and the tour started on the 17th, this is in America,  people [were] singing the words to every new song and going absolutely bonkers.

S] So it has caught on really fast then.

S] Sonder has been described as a concept album, which does seem to be a common occurrence amongst Tesseract albums. Was it your intention from the start to create a concept album or did it happen naturally?

D] Yeah, it was. I think that’s where we create the best material really. When I came back to Tesseract, I think we were just trying to find a way of working together again because I had changed as a singer, the guys had changed as musicians. That album is very much a song on song kind of album. This new one, I mean, I just knew it had to be concept album.

S] Does that mean that ‘Polaris’ was a trickier album to write then?

D] Not necessarily. It just wasn’t as cohesive from a perceptual respective.

S] So, one of the things that Tesseract are known for are their highly intricate, technical song writing and odd time signatures. When it comes to the writing process, is that something you have in mind, to make it technical, or is it something that flows?

D] Not at all, it’s just happens. Acle [Kahney – Guitar] is the main songwriter. He just locks himself away and writes music to film and all sorts of things. He’s got lots of different ways of writing music. Sometimes it just happens. Sometimes it can start with a drum beat or guitar riff.  This time around Acle was taking film clips and removing the audio and writing new music to the film he was seeing or the scenes. There is a song called ‘beneath my skin’ which is a very good example of that on the new album. It’s very flowing. It changed mood all the time and I think that was born from that idea, really. So, yeah, we don’t overthink it. It just happens

S] Recently you have been working on a side project called ‘White Moth Black Butterfly’ how did that come about and was it something you had always eventually intended to do?

D] Yeah, it was actually. When I first joined Tesseract I was already writing for that. It was a creative output. I started to programme synth chords and sing over it and just really learn about music production because I was a novice back then. I’ve gone away and studied and learnt, we all have, and we have all created our own hubs to be creators now. But White Moth is a long term thing. It’s not a fad, it’s not a quick stab in the dark. It has a long-term goal. The last album, Atone; I was so happy with how that turned out. Real instrumentation; strings, orchestral elements, Piano, the harp. It’s organic.

S] I take it the song writing differs quite a lot then between White Moth and Tesseract?

D] There are similarities in the fact that we all write in separate areas of the world or the country and then we file share all time. That’s the one similarity, but yeah, we have different approaches. 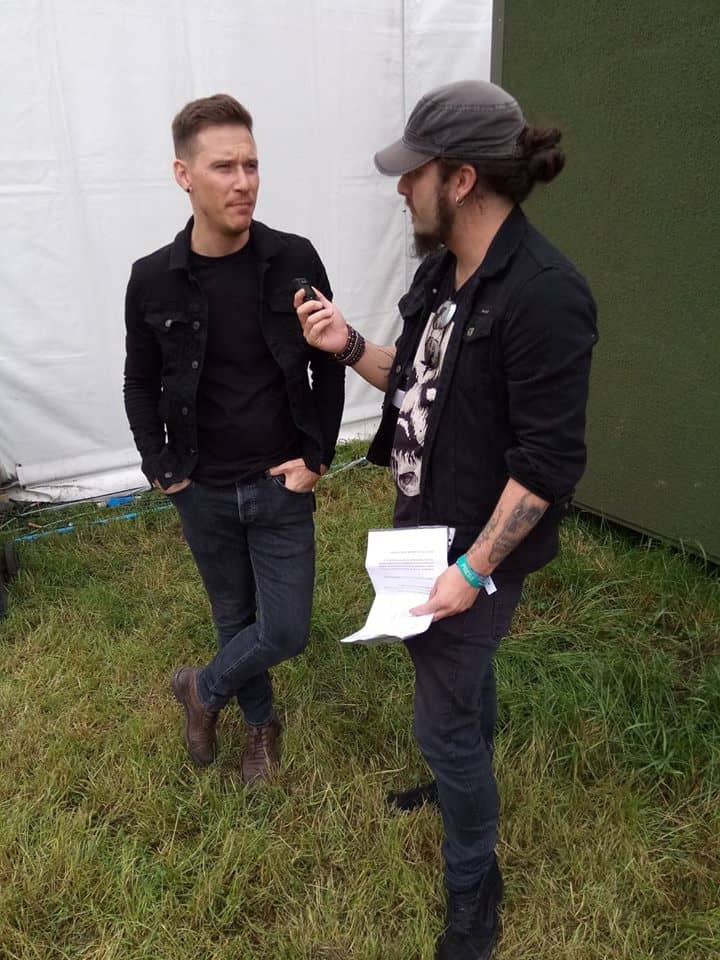 S] Tesseract are one of the most unique bands out there at the moment in my opinion and, I imagine, many people opinions. Did you find it hard to find your voice in a sea of sub genres that was coming out at that point or was it a case of experimenting to find out what Tesseract was about?

D] It’s been a long journey but if I was to try and put it in some kind of way… The band existed for a long time, Acle was heavily influenced by Meshuggah at the time. We knew we didn’t want to be, you know, complete replicas of that. They wanted to bring in a singer in to the equation. I was in lots of other projects that didn’t really make sense before they asked me to join. Everything just clicked. It felt creative and new and intuitive and it wasn’t forced and that was quite new for us all. I think we never wanted to copy.

S] You did leave Tesseract before briefly, was that quite a difficult decision to come back into the mix?

D] It wasn’t difficult to come back to the mix but to leave was one of the hardest decisions I have ever had to make, in fact. And that’s the thing, when you are an artist you suddenly find yourself in a very competitive, tough industry and I think you suddenly realise you have to make hard decisions all the time and get used to it very quickly. So, yeah, we were all good mates when we parted ways. It happened because if wasn’t the right time in life for us to be doing what we were doing but it all came back in. It all went full circle.

S] Plini are actually playing this weekend, aren’t they?

D] Yeah, they are playing tomorrow on the same stage. They are on just before the headliner I think but, erm, I totally forgot the question [laughs]

S] If you can just tell me a little bit about the tour, I know you’re playing a huge show at Shepherd’s Bush Empire.

D] So, bringing BTBAM over to Europe, I mean, they are a lot bigger in America than they are in Europe so that’s maybe what is confusing a few people to see that they are supporting Tesseract but we are bigger in Europe, if that makes sense. If we were to go to the States, we would support them. It works both ways. We would have loved to have brought Astronoid out because they are an incredible band. If you’ve never heard them, check them out!

S] So, are you sticking around for the whole weekend? Are there any other bands you will be checking out?

D] If it had been, maybe, three or four years ago [then] I would have been here all weekend. Unfortunately, I’ve got babies, got to get back and be a dad, so I’ll be leaving this evening. I’ll be checking out a few bands tonight but to be honest, it’s a busy day, so I will probably be getting ready for stage. It’s an exhausting day.

You can catch Tesseract on tour later in the year on the following dates: