The UK djent/tech metal scene is not one to be taken lightly. There are waves and waves of extremely prolific bands, talented musicians and incredible records. And the forerunners of this scene, are none other than the mighty TesseracT. Combining intense, compelling riffs, dymanic drums, and potent, astronomically powerful vocals that would make even the greats tremble with pipe inadequacy. 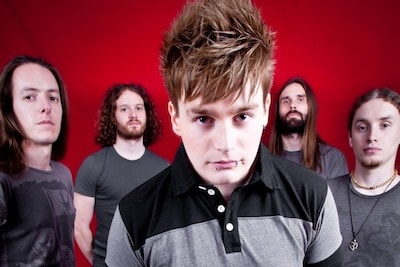 This year saw the return of Daniel Tompkins; the vocal volcano behind Tesseract’s debut album ‘One.’ With Dan back on board, the band are stronger than ever, ready to unleash a plethora of both old and new material in to our aural peripheries. We were lucky enough to catch TesseracT on the UK stretch of their current European tour, chat to them about their plans for 2015, and get a general look in to what it is that makes TesseracT undeniable masters of their craft.

S] Hey fellas, nice to finally meet you. So could you kick us off by introducing yourself?

James] “Hi, I’m James, and I play guitar in TesseracT.”

S] Cool. Okay, how would you describe TesseracT in a single sentence?

S] Wonderful. Who would you consider your main influences, either individually or as a band?

Jay] “Everyone here has different influences, the obvious ones are there rhythmically, so bands like Meshuggah, Jeff Buckley…”

James] “70s Prog stuff like Pink Floyd and so on. I grew up a metalhead.”

Jay] “Basically the stuff we grew up listening to. For me it’s weird bands like Steely Dan, before getting in to more complicated stuff like Sikth and Dillinger Escape Plan.”

S] Not bad stuff! TesseracT are widely construed as a pretty ‘down to earth’ band – can you describe some of the realities of being in a touring band?

Jay] “You’re experiencing it. Everyone just, sits around on their phones, not talking to each other. It’s not that we hate each other, it’s just that the internet is really fascinating. I’d say it’s tiring but it’s not, it’s fun, and you get to see a lot of places. Your body clock changes to a completely different routine, you have to eat at the right time so you’re not full on stage, whatever works so you don’t get ill or you’re too tired.”

James] “And your smell desensitises, so you don’t mind that everybody smells like bumholes.”

S] You’re not wrong! So, what do you guys get up when you’re not being TesseracT?

Jay] “We all work to a degree; we all do something within music that isn’t the band to enable us to do this. I run some rehearsal studios, James works in press, and Dan is a singing coach.”

James] “Amos is a man of the world. So, he goes over there, and eats Chinese food.”

S] As you would in China. Speaking of Dan – it’s nice to welcome him back in to TesseracT. Have you got anything in the works that you can tell us about?

James] “We’re currently working on the new record, which will probably be about seven or eight songs at the moment. We’re not playing anything new live though; it’ll be a mixture of our first two albums.”

S] Do you ever suffer with pre-show nerves? And if so, how do you conquer them?

Jay] “Not nerves. I get too much adrenaline and I just want to play. I have to chill myself out because we play to a click track in our ears we need to keep to.”

Jay] “If the stage is comfortable then it’s fine. I haven’t been nervous in years. Smaller crowd or a festival crowd – it all feels exactly the same.”

S] If you could play with absolutely anybody, who would it be and why?

James] “A great band I’d like to tour with is Tool. They’re an amazing proggy band that I grew up with and I think we’d appeal a little bit to their fans.”

Jay] “I’d quite like to do a Deftones tour, that would be amazing.”

S] We’d probably go to that one. What are your thoughts on the current underground scene? Are they any bands you’re following at the moment?

James] “In our scene there’s a lot of really cool up and coming bands. There’s a Polish band called Disperse who are really good, the guitar player is this young virtuoso kid, really inventive. I’m loving The Algorithym at the moment. I’ve also really got in to the opening act on this tour’s stuff – Navene K. He’s an electronica artist but he does a lot of cool things live – lots of looping guitars, electric drumming and he plays acoustic drums over the top.”

S] Sweet. Okay lastly, if you could only listen to three albums for the rest of your life, what would you choose?

Jay] “Mine would be: ‘Science’ by Incubus, ‘Asia’ by Steely Dan, and probably ‘Nothing’ by Meshuggah. I love those albums.”

James] “It’s impossible! My favourite albums change constantly. I guess it’d be stuff that was important to me growing up. So ‘Appetite For Destruction’ by Guns N’ Roses, ‘Reign in Blood’ by Slayer, and Back ‘The Fuck Up’ by Onyx.”

S] All right, guys. Thanks for your time. I’ve got a couple more questions I was asked by fans to bring forward, if you wouldn’t mind answering them?

S] Awesome. Okay, how do you feel about Marvel plagarising your name?

Jay] “We actually got a lot of traffic when the first line of The Avengers movie was The Tesseract. and we thought okay, great. So we got a lot more hits from people that didn’t know what that word was and were Googling it.”

S] I guess that was a nice coincidence! Last one, Was the name Tesseract settled on, after the shape you made during a band game of Twister?

James] “That would be a better story. The real truth is that it came from a really rubbish sci-fi film Acle saw called Cube 2: Hypercube.”