In our next band spotlight, we talk to Gary Moore of The Mirror Trap about the music, inspirations, touring with Placebo and more… 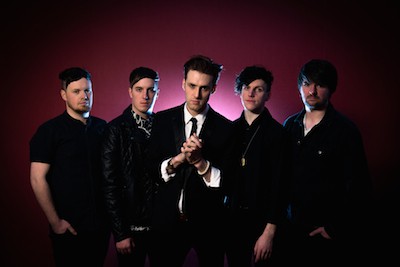 S] How has the tour with Placebo been so far?

G] “The tour has been incredible. Every night it blows my mind that people are being so kind and receptive to us. We are a gang of hyperactive fools, no one knows who we are and they know none of our songs yet they cheer us when we play and chat to us outside after the shows. We are really getting a taste for playing on big stages in front of massive crowds, confidence is growing every night, which I think is making us into a better band. And its always fun to wander about new cities getting lost and finding bizarre little treasures.”

G] “There has been a mixture of highlights really. Playing at the Manchester Apollo was pretty special, it is such a historic venue, and we are all huge fans of Manchester bands. And getting to play at the Academy in Glasgow was amazing on a personal level, as that is a venue we have all been going to for years to see bands. Then the other side of it has been going to cities like Hull and Blackburn where we have no idea what to expect and seeing people going wild for live music, those shows were so much fun.”

S] What sort of stuff inspires you outside of music – think movies and art for example?

G] “A couple of us are real literature fanatics, there is a comic book enthusiast in our ranks and drummer Paul [Reilly] has consumed more TV box sets than any man in history. For me books are just as important as music in what I put into this band. I read continuously, there is no point when I’m not half way through at least one book, I have a sort of feverish desire to understand what human beings are all about, and to try and figure out my own place in the world. I think that questioning every aspect of life is a pretty healthy way to live, and few things make me question life more than a book by some insane genius like Camus, Dostoyevsky or Orwell.

Reading authors likes these makes me feel like I am learning some kind of naughty secret, looking through the keyhole into humanity and seeing it with its pants around its ankles and electrodes on its nipples. I had only ever read one book from start to finish in the whole time I was at school – some dodgy Scottish crime novel – and only really started to read when I was outside of education. It does sadden me a little that in our generation I would be mocked if I was to start talking about a Tolstoy novel in general company, but I would be hailed as a hero if I had completed Grad Theft Auto or could play FIFA on expert level.”

S] What was the track ‘American Dreams’ directly inspired by?

G] “I’ve spent the best part of my young life working for a massive high street clothing retailer, where every day I would interact with hundreds of people, but never on a particularly human level. It was always a sort of scripted conversation, I would been told how to greet people, how formally or informally to speak with them and how to react to their anger when they realised they were being fleeced and lied to. After a while I started to notice that the majority of conversations I was having outside of work followed a similar structure, so I started listening in on other peoples conversation in cafes and pubs, and found that the majority were the same. One person would have an issue, usually a pointless issue that was made to seem deeply emotional and incredibly important, they would tell it to their friend with tears in their eyes, the friend would reply in a comforting way with words that meant nothing at all, then they would reverse the roles. Once both parties were suitably drained of tears they would jovially start to say some words they’d read on Facebook and laugh. The world is full of people just saying words for the sake of making a noise and justifying being awake. It scared me that I was a part of it, I long for some real human connection, beyond the scripted grunts. ‘American Dreams’ kind of came from that train of thought.”

G] “When we finish this current tour we are going to go home and start recording an album. We’ve got tons of songs, some finished, others just bits and pieces, we need to finish them off and figure out which ten or eleven we can make into a listenable body of work. Then the summer plan is to just play continuously, where ever we can, we are currently booking festivals around Europe so it should be a mad summer.”

S] If you could come up with a Frankenstein’s monster for the Mirror Trap sound – eg: the head of Placebo, the arms of The Cure and the legs of Joy Division, what would it be and why?

G] “Oooooh, that is a tough question! The suggestions you have made there are pretty fitting. I suppose in an ideal world I would like us to be seen with the brains of the Manic Street Preachers, the face of Jeff Buckley, the massive swinging genitals of Queens of The Stone Age, with the heart of Joy Division and the skin of The Smiths, all wrapped up in David Bowie’s clothes!”

S] What have been your major career highlights to-date?

G] “In the summer of last year Placebo invited us to play with them on their Russian tour, the whole experience was incredible, the crowds were amazing and we had an all round good time. But I remember one strange point, sitting in the restaurant carriage of an old train on the Tran-Siberian railway line traveling between two shows, drinking vodka and looking out the window into the vast wilderness all around us and thinking “What the fuck I am doing here?!” and just laughing to myself. Rock ‘n’ roll is a crazy and unpredictable beast, and I think that moment sort of summed it all up for me.”